WARNING: If you have not severely out-levelled Alderaan, this datacron will require 3-4 people capable of dealing with level 40 ELITE mobs. For those intent on trying to solo it, death runs generally do not work, and even stealth attempts are very risky and time consuming. If solo is your only option, you may want to come back when you're in your mid-40′s.

WARNING: This datacron requires the vendor-bought item RED DETONITE ACTUATOR (although only 1 of the individuals attempting the datacron need to have it, so if you're in a party of 4, only 1 of you need it). You can find more about it's location on the main Alderaan page, but we'll also provide details here.

You will require the “Red Detonite Actuator” to obtain this datacron, which can be bought from the vendor “Lain Ricie” in the Juran Mountains. The location from the 2 nearest taxis is as follows: 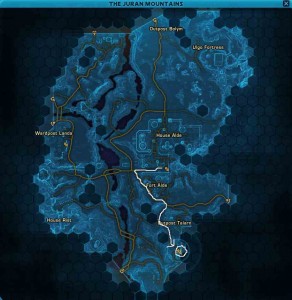 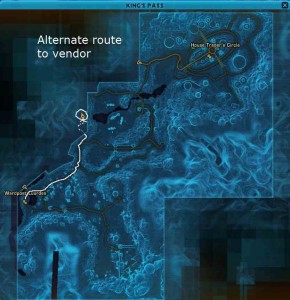 You'll probably want to click the above images for a larger view. If you're new to Alderaan and don't know where these areas are, check out the world map on the main Alderaan page.

Once you've reached the vendor, buy a RED DETONITE ACTUATOR: 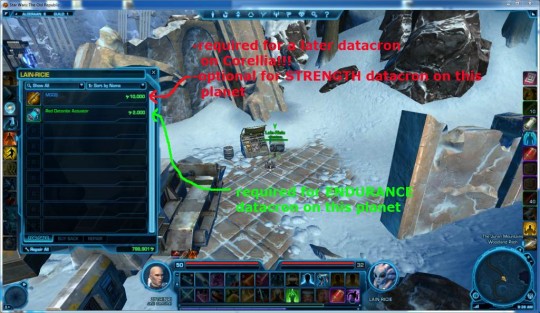 You may want to consider buying more than 1 actuator, in case something goes amiss during your attempt. If you're attempting to solo it at a low level, you'll DEFINITELY want to buy more than 1, because there's a high chance that your first few attempts will fail.

Again, if you're in a group, only 1 person in the group actually needs to have the actuator, though it doesn't hurt if somebody else has a backup.

Assuming you now have the RED DETONITE ACTUATOR….

The datacron in a heroic area of King's Pass – take a taxi to Wardpost Luurdes Thranta (check the world map on the Alderaan page if you're don't have the flight path and are unsure how to get there) and then follow the maps below: 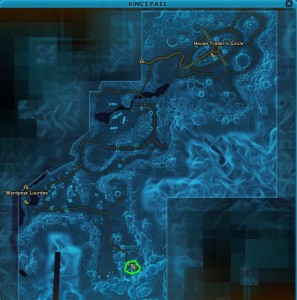 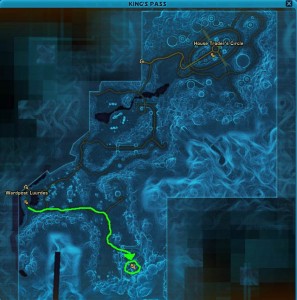 Once at the circled green area, things should look remarkably close to the way they do below. Just follow the arrow. 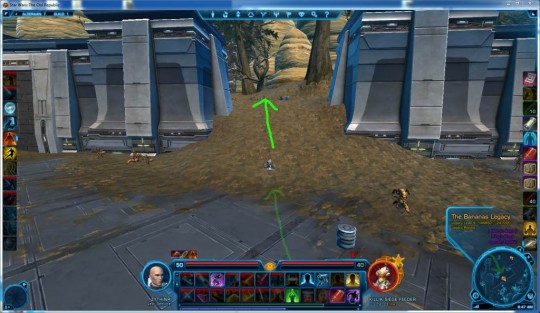 Below, we can already see the cave we need to enter. Oh, and we also see a mess of level 40 ELITES. If you're in a group, you'll probably spend a little while clearing your way there.

Make your way into the cave. 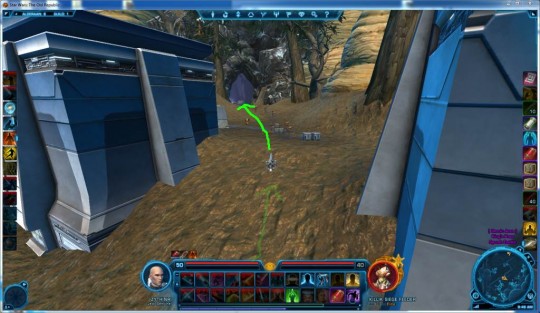 Once in the cave, the map will look as it does below. Follow the green line (again, you'll be killing a number of elite groups on your way): 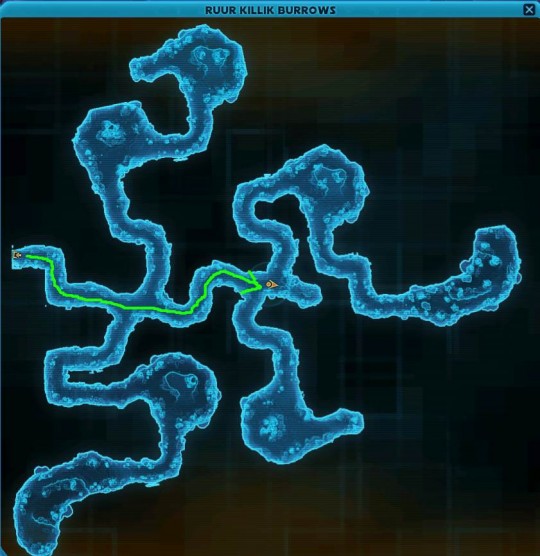 Once you're at the point where the arrow ends….

…You should see that you can't go further east, as you are blocked off by boulders. Now you see why you needed that detonator. 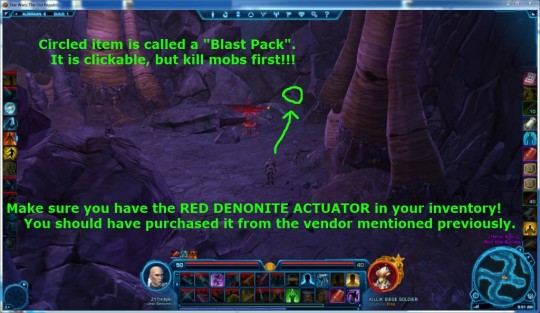 Look in the image above (actually, click it to zoom in). You should be able to just barely make out a clickable item called a “Blast Pack”.

Note that for anybody attempting to solo it at a low level (via death-runs or stealth), you can probably see now why it's going to be hard. The “Blast Pack” takes 6 seconds to detonate, and if the explosion doesn't kill you, the elites will have. What makes matters worse is that the wall doesn't stay down forever (only about 3 minutes before it resets), and 10-minute rez timers (not uncommon if you did death-runs the whole way) can cause problems.

Assuming everything went according to plan (or mostly according to plan), get out quick rezzes if need be (remember, that wall comes back in about 3 minutes, so don't dawdle!), and head in. 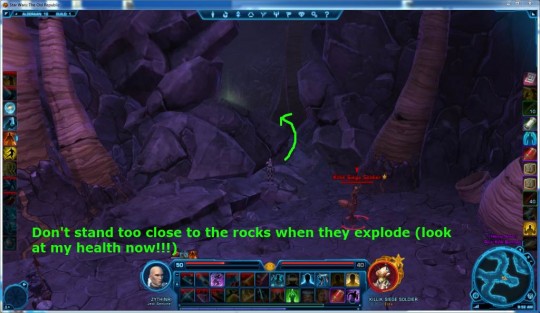 We can already see the feint green glow of the datacron! 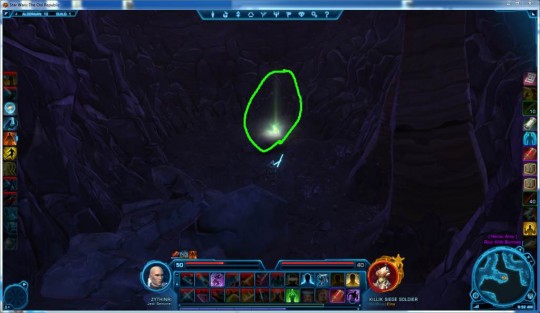 Grab the datacron, and enjoy your +3 Endurance.

If you sit inside too long, you don't have to worry about becoming “trapped” when the wall re-spawns – it will give you a path of rocks you can use to jump out (though I wouldn't try standing where the rocks actually spawn – you might get stuck inside a rock). That said, your group is probably ready to Quick Travel out anyway.

Chances are that you've finished all the Alderaan datacrons (if not, the rest are easier – check them out below!).

It's been a big planet – I understand if you need a break. Why not bookmark the site, and come back tomorrow to check out the next planet?

On the other hand, if you're one of those people who are always ready-to-go (c'mon, more stats – more big numbers in PvP and PvE… you know you want to…!), head back to the main page and check out the next planet right now!