I'll break this down into two parts, Major and Minor.

You turn the key on, and you hear gas. You pop off the air cleaner, look down, and see gas POURING onto the throttle plates. I've been there. It sucks. Fortunately, it can be narrowed down to 3 things...

From the drivers side of the car, look at the carb. Look between the fuel inlet/outlet hoses. Just below there's a solenoid with a wire coming out of it. This device is called the float bowl vent solenoid. When it works, ignition goes on, and there's a fairly loud CLICK as it pulls back the plunger, allowing the float bowls access to the air. If it doesn't work, air is trapped in the float bowls. As fuel goes in, it compresses the air which pushes on the fuel, forcing it out the jets - usually through both the primaries and secondaries.

Fortunately it's easy enough to test.

Get someone in the car, have them turn the key to on. If you hear a click from the solenoid, it's probably working. Easy as that. Alternately, you can disconnect the wire, and apply POSITIVE battery power to the wire going into the solenoid. You should hear a click. No click = bad solenoid = time to replace it. If you're really skeptical you can pull the air horn off the carb (basically the whole top piece), ground the air horn, put positive to the wire, and you should hear the click and see the plunger move. 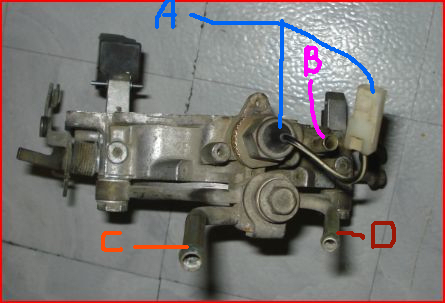 Air horn is UPSIDE DOWN
(A) Float bowl vent solenoid & wire (B) vent hose port - path to float bowls when key is off (C) fuel inlet (D) fuel outlet
Though you can't see it in this image, at the top of the carb (bottom in this pic), right beside the primaries (opposite of secondaries) is a little section that, when the solenoid's working properly, becomes the air vent for the float bowls.

Check both sight glasses - the one at the front and the one at the rear of the carb (you'll need a mirror and flashlight for the rear). They should both be at the 1/2 way mark. If you can't see the line, they're probably full of gas. Float level may need adjusting.

If the fuel in the sight glass is full, but looking at the float level with the airhorn off it ooks fine, either the floats or needles are binding, OR the needles and/or seats are worn. Pull off the air horn (top part of the carb), turn it upside down, make sure there isn't gas left in there, plug the fuel outlet with your finger, put your lips around the fuel inlet and blow (note: remember the disclaimer! :p). There should be no air heard escaping. With the air horn still upside-down, lift up on one of the floats and you should hear/feel air coming out as you blow. Let it go and it should stop. Do this for both. If there's even the SLIGHTEST amount of air squeeking through, you may want to try new needles and seats. I've had one *almost* perfectly pass this test (to the point where working it a bit got it to appear to be working) and the needle still needed to be replaced. If you're 100% sure it's not a sealing problem, you may have a float that needs to be replaced. It's also possible for a needle to bind, but I've yet to see it first-hand. Apparently a couple drops of sewing machine oil can help to alleviate this (as well as work in new needles).

1) Float level's off - check and adjust if necessary.

2) Some of the air jets are plugged (time to pull the carb apart and clean it!)

I suppose it *could* also be a messed up or mal-adjusted idle mixture adjusting screw, although that would tend to severely mess up your idle as well (especially when warm). I'd imagine that to affect the running/drivability of the car it would have to be so bad that the thing just plain wouldn't idle, although I could be mistaken.