As far as a carburetor's concerned, very little happens during cruising...

Problems at cruise are generally either:

3 times per rotar rotation, it's expected that there's a proper air/fuel mix in the combustion area (near the spark plugs), and the spark plug fires at the right time, igniting the mixture properly and fully each time. A miss, stutter, or mild bucking is USUALLY caused by a weak spark or no spark. Improper timing can cause the spark to happen at a less-than-ideal time as well, causing a miss. If that's not the issue, it could be carb related as well.

1) Check the float levels, both back and front (you'll need a mirror to see the float glass at the rear of the carb - firewall side). They should both be in the center.

2) With the car running, stopped, and in park/neutral, have an assistant increase the engine speed while you look down the carb. Alternately, you can move the throttle by hand from within the engine bay to increase it. Make sure fuel is flowing from both primary jets evenly throughout the RPM range. If one side is more heavy than the other, doesn't seem to spray as well as the other, etc., something in the carb may be plugged.

Failing that, it's usually not a carb issue and you should generally be checking elsewhere.

There's usually just one cause for this... Not enough fuel.

1) Most of the time it's a plugged fuel filter - not enough gas gets to the carb and slowly the float level drops as you drive. Replacing the fuel filter is obviously the solution. If it cures the problem but only temporarily, you may have a bunch of rust in the gas tank. Either stock up on filters, or get the tank replaced.

2) It can also be a plugged screen in the fuel inlet of the carb. If you've bypassed the fuel filter, the screen takes over as the filter. It's accessed by removing the fuel hoses, removing the bolt near the hoses that holds the assembly to the side of the carb, and then removing the top 2 bolts connecting the 2 fuel "rails" to the top of the carb. (one at the front bumper-side and one at the rear firewall-side of the carb). Be careful not to lose any washers, and make sure everything's bolted back nice and tight afterwards or you'll get some leaks. Be careful with the screen too. If you remove/destroy it, any gunk that gets by the filter is just going to plug up the carb. 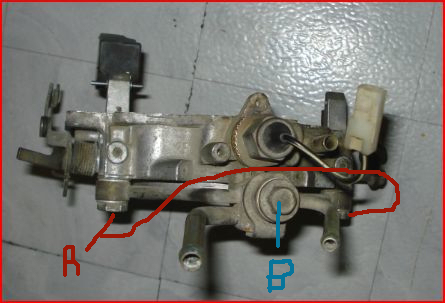 Air horn is upside-down
(A) top 2 bolts - screens within IIRC (B) bolt holding assembly to the side (remove first, reinstall last)

3) It could also be a carb running too rich. When the engine's cold it likes a lot of fuel. When it's warm/hot.... not so much. It'll be more inclined to flood/miss/die. Check the floats, and consider taking the carb apart in case some of the air bleeds are plugged.

That's generally about it as far as the fuel/carb end is concerned.