Blower Motors tend to stop working after years and years. Usually it's just that the brushes have worn out (just like a starter or alternator), but sometimes the fan seizes up, or leaves manage to get in the system and stuff things up.

In any case, the blower motor on the RX-7 is very easy to remove (at least... compared to many other vehicles).

A good idea is of course to check the fuses before assuming it's broken. There's also a 4-wire black plastic electrical plug by the blower motor (under the dash on the passenger side), and if you're good with a multi-meter, you can use it to check for power by unplugging the black plug, turning the ignition on, turning the blower switch on, and checking for power across all 4 pins (depending on what speed you set, you may have to check different points to get a reading).

We'll assume you've done all that and you're sure the blower motor's dead/seized/etc. Time to pull it off!

Yep, that's it. You might not even need the screwdriver. On the other hand if you plan to take it apart, you'll also need a phillips screwdriver (also known as a star-shaped screwdriver).

First, where is the blower motor located? Well, it's under the dash on the passenger side. Move the passenger seat back as far as you can, stick your head under the dash, and look up. It's a big black circular-ish thing. If you have a bad back, it'll probably be sore after this so try to have the tools handy.

Now to disconnect it, it's a matter of 3 bolts. 2 are side-by-side and you'll see them when you look up. They look like this: 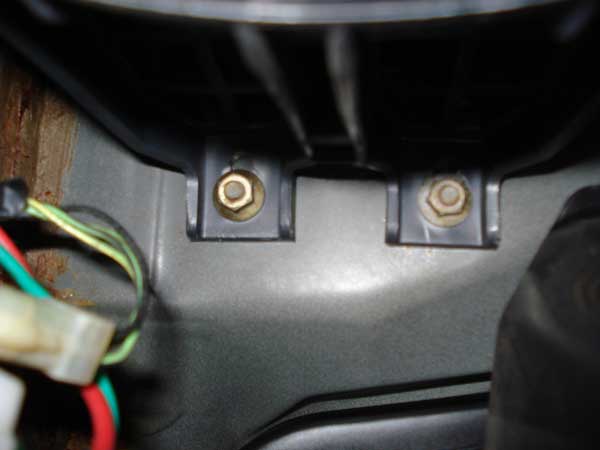 The final one is against the firewall. You may have to peel back the carpet a bit, although usually there's a cut-out so you can see it. You won't have to be upside-down for this one: 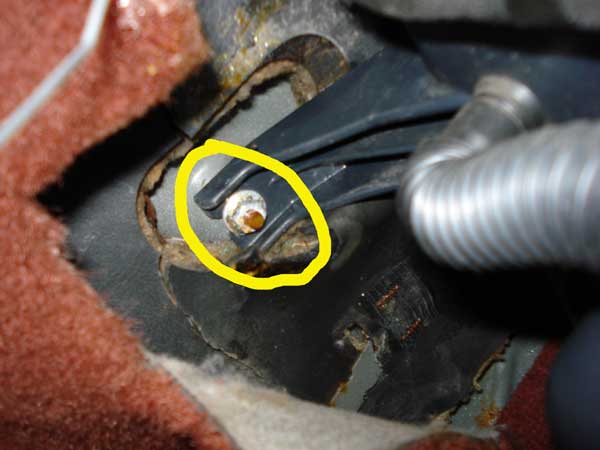 With those 3 bolts removed, it's just about ready to come out. Usually just 2 things left to disconnect:

1) Electrical plug - near the right side. Both the female and male parts are black and have 4 wires/pins. If you have other plugs nearby, leave them alone (often a white 4-pronger and a black 2-pronger - dont touch em)

2) A huge squarish tube that goes towards the center. There might be a plastic plug that keeps it together - it comes out easily if you stick the flat screwdriver under it and pry it off. Then the tubing should be able to be pushed away from the blower motor assembly and taken off.

2b) If you have air conditioning, there may be a box instead of the tube mentioned above. In this case, there might be a metal band held by a phillips screwdriver. Take out the screw, and push the blower assembly away from that black box (it's the air conditioning stuff).

Now, pull the thing out. The easiest way is usually to pull it towards you so that the threaded stud sticking out of the firewall clears the fat plastic arm coming from the blower assembly. Then pull it down and out. You may have to wiggle it a bunch or give it some good yanks in multiple directions, but it should come without too much difficulty. Note that this is harder if you have that air conditioning box because you have less room to play with, but it still comes.

Finally, once it's most of the way out, the last thing you'll have holding it in is the cable from the center-dash heater controls. Yank the cable out of the blower assembly clip, then use the flat screwdriver to pry the loop off the little flat tab it's on. 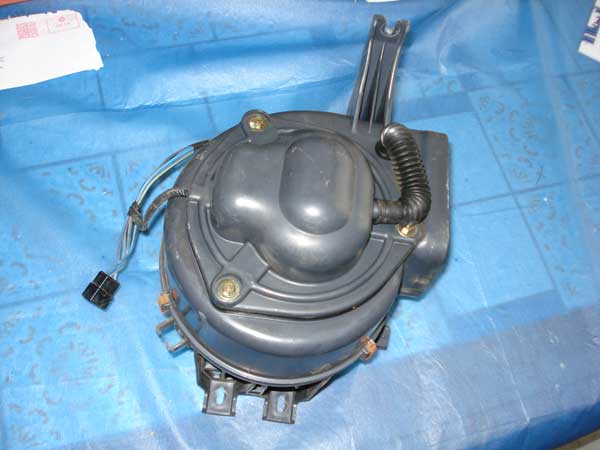 Installation is the opposite of removal!

Ideally, you'll have another blower assembly from a parts car or junk yard. If you're intent on re-using yours though (and just fixing whatever's wrong), it can be disassembled.

If you're planning to get to the big white circular fan, ignore the rest here but look at the 1 picture below. You'll see a couple metal clips at the bottom left and bottom right. They're NOT circled. There are more of these (4 in total I believe) but if you take them off you should be able to pry things apart.

Otherwise, I'll assume you're looking to get at the brushes. First, remove the 3 screws you see in the below picture. You'll also see a yellow arrow in the pic showing a little hose that yanks right off. 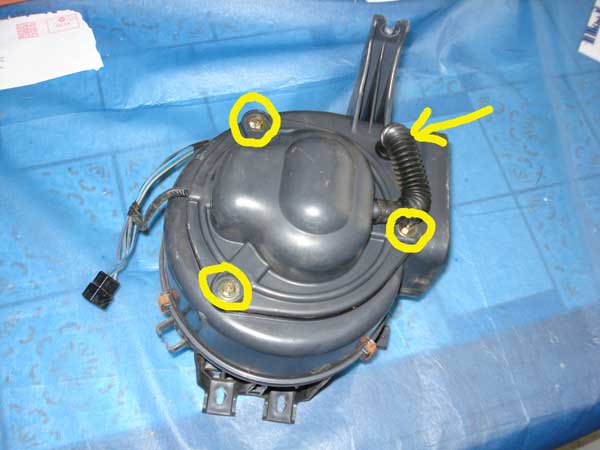 Now, hand that piece off (sometimes it sticks a little), and you should be looking at something like this: 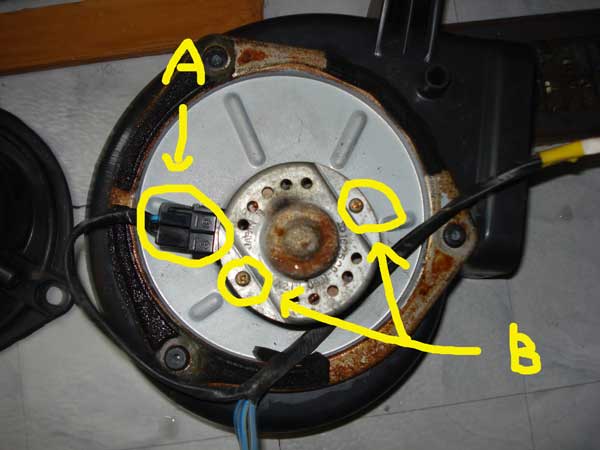 A is an electrical plug - it actually goes to the brushes beneath this metal piece. You can unplug it to make things easier.

B is the 2 screws that get removed next.

Once the screws are removed, the next part is tricky. You want to remove the metal plate, but NOT the other stuff that will stick to it. You may want to use a flat screwdriver to GENTLY PRY the metal piece up, keeping the rubber pieces below the screws DOWN and not attached to the metal.

If you mess this up (and end up with the "guts" attached to the metal plate), it's no big deal except that the brushes will pop out and the springs may go flying. Not the end of the world unless you lose them, but try to do it carefully and properly anyway.

With that off, you'll be looking at this: 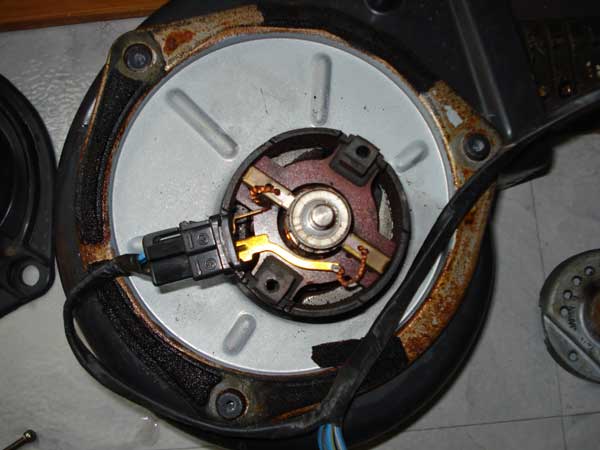 Now, you can pull the next piece up slowly, being careful not to have the brushes and springs come flying out. 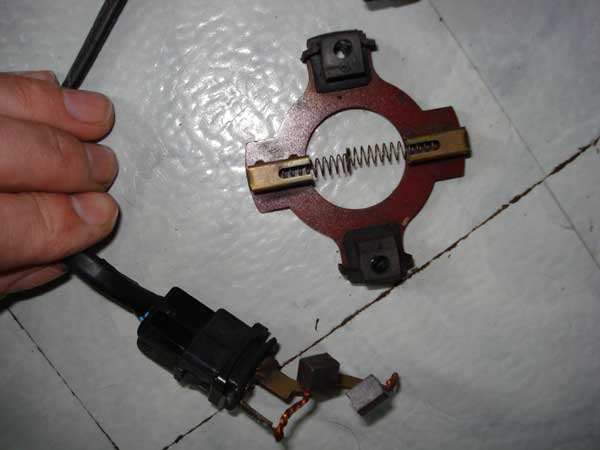 Now, if you have new brushes (I sure hope so, otherwise why did you pull this thing apart?!), you can hopefully do some soldering and get the old ones off and the new ones on. Or, you might be able to take the plug off (since the brushes will be attached) and head to your local starter/alterenator shop and have them get some new ones for you and put them on. You may want to bring everything actually if you do this so that the shop knows how LONG the brushes can be.

When you go to put everything back on, it's a little tricky with the fingers, but basically you compress the springs, push the brushes in, and then slide it back down the shaft.

Reassemble everything and you're done!