When you stomp the gas, the carb does the following:

A little background on the accelerator pump... The reason it's there is because by default, when you tromp the gas, the throttle plates open, instantly sucking more AIR into the engine. I say AIR because it actually takes a moment before additional fuel is pulled from the jets.This means there's a second or two where the engine has lots of air but not enough gas, making it run extremely lean, usually resulting in the engine wanting to die for a moment before the fuel catches up.

Enter the accelerator pump. There's what's known as the "accelerator pump circuit". In the center of this is the accelerator pump itself. In the nikki carb, it's filled with gas from the rear float (firewall side of the carb). When you push the gas down, a little lever pushes a diaphragm in the accelerator pump which forces gas up through a couple nozzles at the top of the carb, squirting gas down the throat of the carb.The idea is that this extra gas comes at the exact moment it's needed - during the time between where the throttle plates open and the time that the fuel coming from the jets actually "catches up". It works extremely well... when it works.

A car that stutters when the gas is pushed down often has a faulty accelerator pump, or a plugged accelerator pump circuit. It's easy enough to check if it's working though.

With the car off, turn on the ignition to turn on the fuel pump. This will ensure that the float bowls aren't empty. Make sure the choke's open (isn't pulled) so you can see. Look down the carb while an assistant pumps the gas. You should see a stream of gas squirting downwards from the accelerator pump nozzles each time the gas is pumped. You won't be able to see the holes in the nozzles, as they're pointing down, but you should be able to see a stream of gas shooting down from them. DON'T BE OVERZEALOUS with the pumping - that gas is going down into the engine and you could easily flood it. It should only take 1 or 2 pumps to see. Alternately, you can do this with the vehicle running so that the gas is burned instead of pooling up in the engine.

If gas isn't spraying, there's usually a few possibilities:
-float level too low on the firewall-side of the carb (make sure it's halfway - if it's too low, fuel won't reach the opening that goes from the bowl to the pump)
-accelerator pump is faulty - it's a simple device. if this is the case, there's usually a rip in the diaphragm, resulting in gas coming down the side of the carb from the pump housing.
-accelerator pump circuit is plugged - to get at the circuit, you'll have to remove the carb. There are 2 inlets, each has a screw which will need to be removed. Remove the check ball and weight for each inlet (you'll have to hold the carb upside-down to get them to "fall" out - do it over a clean area and try to use a cloth underneath - those check balls are EASY to lose. Spray it out with carb cleaner and compressed air. To clean the nozzle itself, I generally burn the end of a twist tie so that only the wire is left, and find it to be a decent size for poking through and making sure the holes are clear. 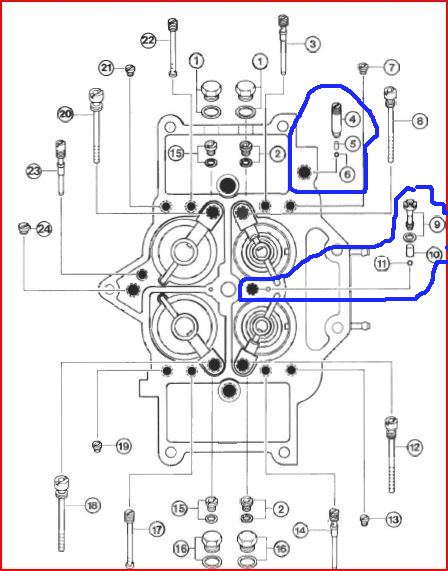 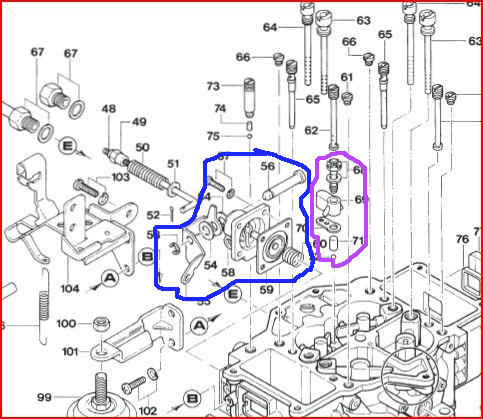 First image has the 2 sets of screws/weights/balls circled. Second image has the accelerator pump itself in blue, and the inlet that contains the nozzle highlighted to give you an idea as to what the nozzle itself looks like as well. Both taken from carburetor manual.

It's worth noting that the accelerator pump can be adjusted with a nut that attaches to the pump, shown as #49 in the 2nd image. I've found it best to leave it alone though as long as fuel sprays with even the slightest press of the gas, continuing throughout the pedal travel.

If the accelerator pump is working fine and you're still having issues when accelerating, I'd tend to start looking elsewhere - probably at ignition timing next.