If you have accelerating issues, but only at the really high rpms, there are a few possible carb-related possibilities, the most likely of which are these:

You'll probably know if you have these. Basically, the stock system has vacuum-operated secondaries - because of the way they operate, the accelerator pump doesn't become an issue when they open. However, with mechanical secondaries, you will either need to learn to be gradual with the gas when opening them, or mod the accelerator pump to increase the duration of the shot (as well as increasing the total volume) by stretching a spring and adding gaskets on either side of the diaphragm.

Three big reasons for this.

First (and most likely) is that the "Throttle Sub Return Spring" popped off/out. This usually results in the gas pedal not going down as far as it should, and also means the secondaries WILL NOT OPEN. There's an image below. If the piece on the left isn't "connected" at the top, you'll have to muster up some strength to fight the spring tension of both springs and get it back up there. If you slip, it *will* hurt. Do this with the car turned off by the way. If you're missing the nut (some people seem to obtain cars that have them missing), you'll probably have to get a new nut from a parts car. Don't ask me how to adjust it - in all my searches I've never found an answer.

Second is that the entire assembly for the secondaries is seized. I've seen it. You can try fighting the spring tension to force them open a bit (just to make sure they move), but if it IS seized too much force might bend something. If in doubt, pull the carb off, disconnect everything, and it should move pretty easily.

Third is the "Secondary Diaphragm Assembly", located on the passenger side of the carb towards the front (pic below - #86).These can seize, or the diaphragm inside can leak. The easiest way to test this is to disconnect it (3 screws accessable from the front-side of the carb, and a washer/pin connecting it to the lever). With it disconnected, make sure the arm moves back and forth without too much effort. Next, move the arm and use your finger to plug the vacuum hole. Release the lever and it shouldn't move very much. If it moves back to the original position with the hole plugged, it's not holding vacuum, is leaking/shot, and should be replaced or else your secondaries aren't likely to ever work well (if at all). If you'd rather not replace it, you could fabricate something to plug the hole on the side of the carb and read up on converting to mechanical secondaries.

Easy enough to test - start the car, have an assistant bring the RPM's up to about 3000rpm, dig your fingers in toward the throttle linkage for the secondaries, and force them open a touch for a moment. BE CAREFUL! They're spring loaded and you could touch a hot engine part - either of which can hurt! If you see gas pouring evenly from the secondary jets, they're probably fine. If the secondary plate opens and there isn't gas.... they're plugged. 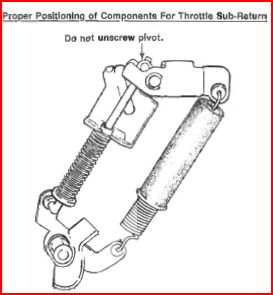 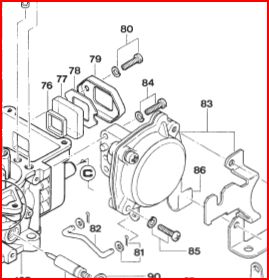 Issues could also be related to ignition (sparks not happening) or timing (sparks happening at the wrong time), as there's a huge demand on the ignition system when you get to really high rpm's.