The +3 Strength datacron and Blue Matrix Shard require you to take a 40-minute ride on a hot-air-balloon of sorts.

I think I forgot to mention something… Oh yeah, and after that ride it's possible to miss a jump, which means you'd have to start all over.

While success results in 2 datacrons, due to the penalty for failure (essentially an hour of your day wasted), these datacrons have been given a difficulty rating of Insane.

Having a speeder for this datacron can be helpful, but it's not required.

First, you need to get in position. The start-point is located in the Dune Sea (check the world map on the Tatooine page if you don't have the flight path), so take a taxi to Outpost Thorazan and head to the circled area of the maps below: 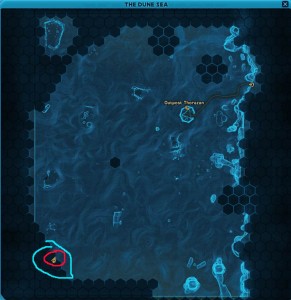 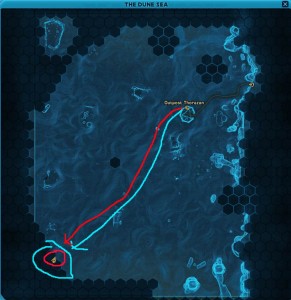 As you approach the circled area, you'll see a large Sandcrawler which you'll need to jump onto. Things should look similar to below: 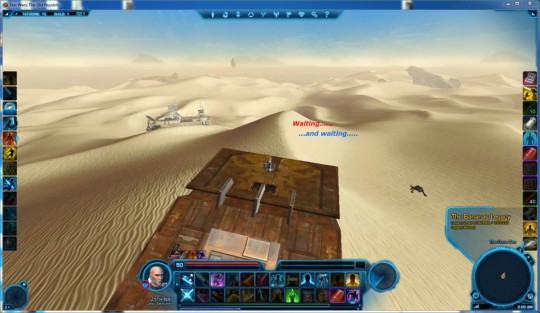 As you can see, we're waiting. If you just missed the balloon, you could be waiting nearly 40 minutes.

Make a few calls, talk with some guildies, do some crafting… just don't alt-tab or you might come back only to find you've missed it again!

Eventually, the blimp will show up. 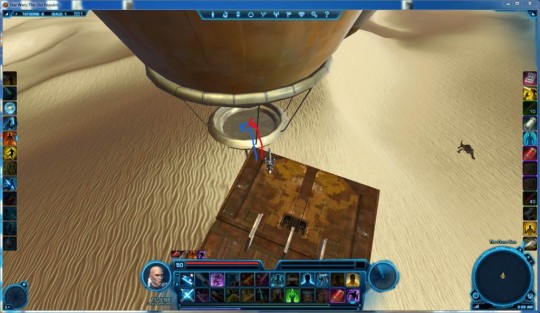 It comes close enough that it's easy to make the jump (it comes so close that it's possible you might be able to just run onto it, but jump just in case).

Now it's a long ride.

I would have taken screenshots of the ride, but it's insanely boring.

You'll see most of the western Dune Sea while you're on the blimp. Be very patient, as the blimp zig-zags all over the map, moving ever so slowly.

After what seems like forever, and once the blimp's in the north-west section of the map, you'll see another sandcrawler in the distance.

As you near the new sandcrawler, you'll see the matrix shard glowing. 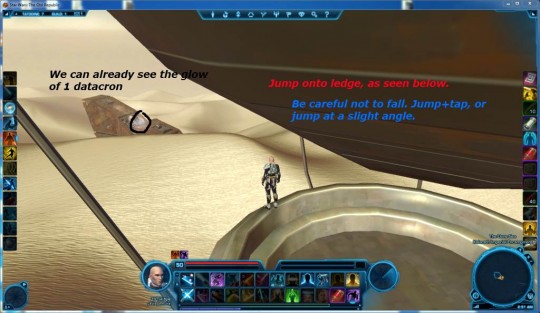 As depicted in the image above, now's a good time to start getting into position. You want to be on the lip of the blimp.

A running jump to the lip of the basket is risky, so the easiest way is to JUMP+TAP. That means jump, tap& release forward, and continue doing so until you're on the upper lip.

Now, if you have a speeder, you can mount it. As mentioned in the next image, you may have to reposition slightly, so you can wait until you're closer to mount up if you'd like. 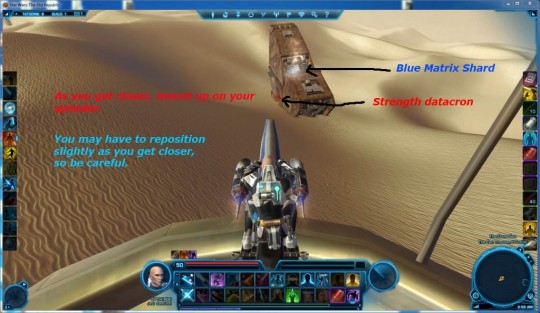 Note that a speeder is NOT REQUIRED. The advantage to a speeder is that when you're close enough, you can just zoom off the blimp and make it (though trying to jump while on the speeder is a good idea just in case you weren't as close as you thought).

If you don't have a speeder, you'll usually have to jump (and make it).

Generally, once I'm at the point you see below, I zoom off. Note that the blimp *does* continue to move closer for at least a few more seconds, so you may want to wait a few extra seconds, and do it at the last possible moment. 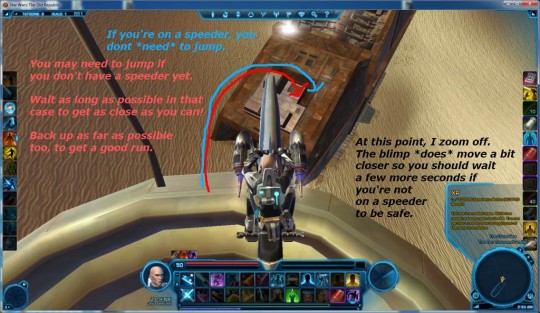 If you miss this jump, you're probably raging. I suggest you take a break at this point because if you miss again, there's a high probability you'll start smashing things.

Assuming you made the jump, 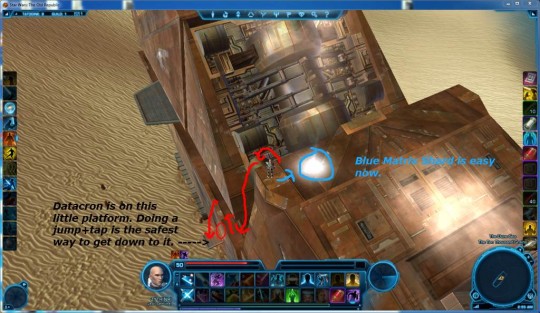 Click on the image above for a larger view.

The Blue Matrix Shard is *right there*. Grab it first. Once you start heading down, you won't be able to reach it.

Then, you need to perform a few careful jumps/falls to get to the small platform with the +3 Strength datacron.

In the image, you'll see that the location of the Strength datacron is carefully labelled. You also want to be CAREFUL when heading down to get it. You want to make very GRADUAL movements to start heading down there. If you rush things, you can easily fall or “bounce” yourself off of the sandcrawler.

For the final “fall” onto the platform that contains the Strength datacron, you'll probably want to JUMP+TAP your way off the ledge above. This takes quite a few JUMP+TAP's (at once point it'll look like you're suspended in mid-air), but it works.

Don't be afraid to pan your camera around when positioning for falls/jumps. It's better to spend a couple extra minutes being careful.

Now that you've successfully faced the 2 longest datacrons so far (if there were a “patience” stat, you'd have it in abundance!), check out the others on Tatooine with the buttons below, or head back to the main page and check out the next planet!

"You've failed, your highness. I am a sharer, like my father before me." -Luke Skywalker