The +3 Aim datacron requires a long walk, part of which is through an Imperial town. There aren't any quests or flight-paths in the area either, so don't bother waiting until it's convenient – this is one of the datacrons you may as well grab when you feel like getting some exploration done.

You can start your journey from pretty much anywhere in Jundland. If you're taking a taxi, the Dreviad Outpost is as good a place to start as any. The maps below show the path from the taxi there (click for larger versions): 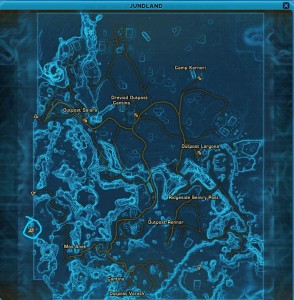 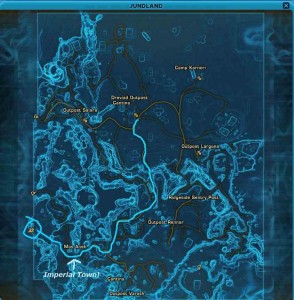 Note that in the above map (the one on the right), we've labelled the Imperial town, Mos Anek. Nobody I'm aware of has found a way to avoid the run through this town, and it contains a few level 50 ELITES.

You'll be taking a few “death runs” through this town, but here are a few tips to help minimize them – at the very least, hopefully keep you from getting to a 10 minute rez timer.

Now, let's assume you made it all the way to your destination. It's a heroic area, but most mobs can be avoided, and the mobs aren't terribly high anyway – they're in the level 25 range. 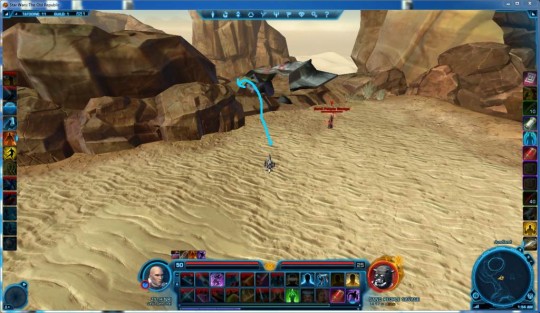 You'll see above just past the elite, there's a ledge/cliff. Head to it. Note that if you finished (or almost finished) all the quests on Tatooine, you might be a high enough level to completely avoid the elite. Take your companion out anyway just in case you have to fight him.

Once at the ledge of the cliff, look down. You'll see the datacron. 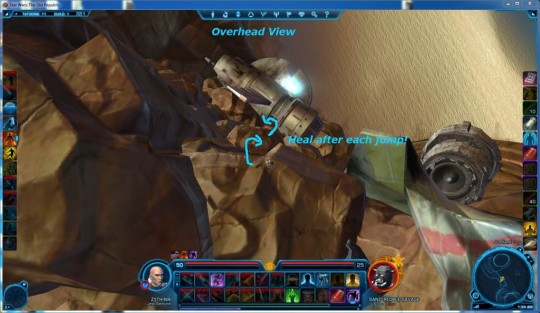 There are 2 jumps/falls to take. Heal up between each one. You don't have to land directly on the ship-part (you can get there from the rocks)… just don't go flying over it or anything.

Now it's just a matter of jumping down. Don't do anything silly and miss it (it's a long walk back). 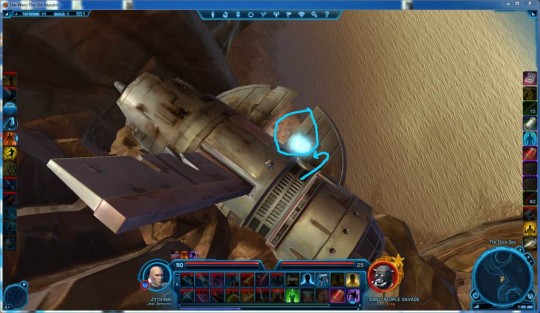 Jump down and grab your +3 Aim datacron.

Now if you haven't done the “air blimp” part of this planet and happen to have an hour or so of free time, take some careful jumps down from here along the wall (don't just plummet down or you'll die) – you're now in the Dune Sea, and can start the journey towards the +3 Strength datacron AND Blue Matrix Shard.

See the details by clicking the appropriate button below!

"Good, I can feel your anger. Take your mouse. Click that share button and your journey towards the light side will be complete." -Emperor Palpatine