Currently, one of the toughest datacrons in the game, the +4 Strength datacron requires you to kill and loot a level 47 CHAMPION mob with 92k hitpoints (and that's just the pre-requisite!). Most classes can not solo this mob before level 50, and even at 50, pure DPS classes have a lot of trouble trying to solo with their companion.

Note: The Ancient Probe droid only drops 1 Depleted Datacron. If you group up to kill him, make sure that everybody in the group is willing to go together to get the actual datacron at the same time.

We start by following the map below (showing the direction you'd go from the main republic base, though you may as well pick up the Republic flight path in the Clabburn Tundra if you don't have it yet). The “Ancient Probe” droid has to be killed as a prerequisite, so we start by finding him. 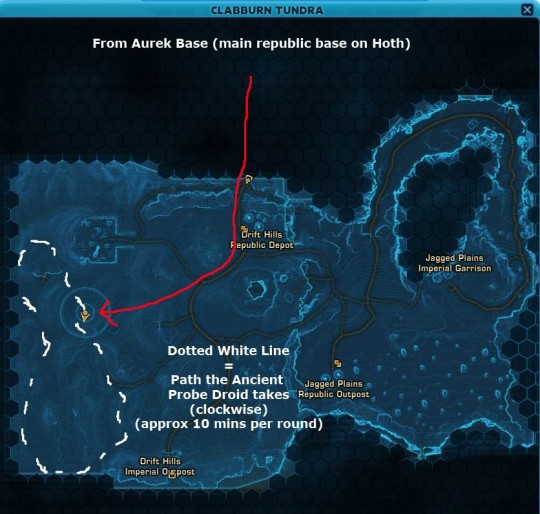 As you can see above, the dotted white line shows the path the Ancient Probe droid takes. It took 10 minutes for him to complete this path, going clockwise. Technically, he dips very slightly below into the next zone, but if you stand anywhere around the dotted line, you should run into him.

Note that he's quite easy to find unless he's been recently killed (the respawn timer takes a while). In that case, you may want to leave and check back later.

Once you find him, you'll see he moves rather quickly. You'll need a speeder to keep up with him. 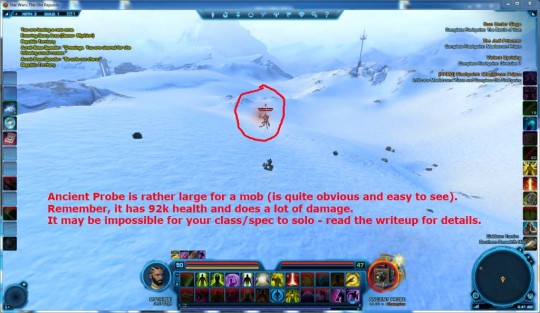 Before going any further, we'll break down your chances of solo-ing him at 50:

A few tips when engaging him:

Got him down? Great. Here's the loot: 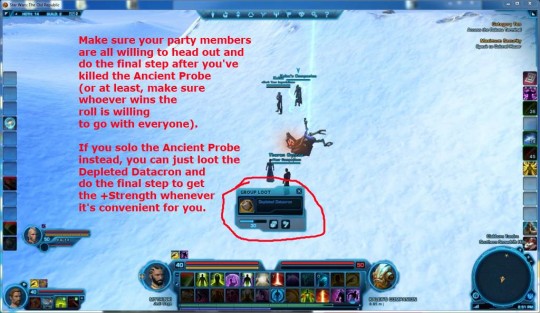 As mentioned previously, if you're in a group, only 1 person will win the role, and you'll all want to do the next part together (the person who wins has to be there to use the Depleted Datacron).

Next, we head to the Starship Graveyard, on the opposite side of Hoth (the far east side). 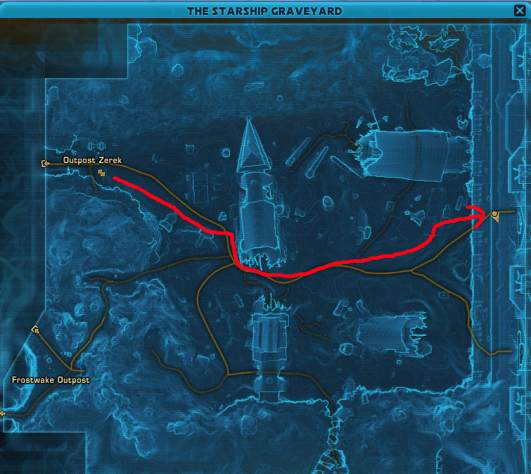 Simply follow the road to the red arrow (don't head inside the building – the datacron is at the outside entrance).

From here, it's pretty simple. Look at the wall, and you should see a pipe. 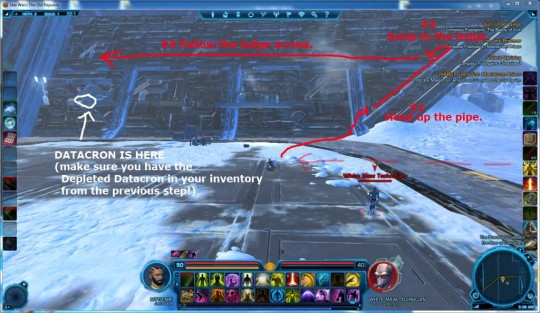 Climb up the pipe, jump onto the ledge above, and follow the ledge as shown in the image (click for a larger view). 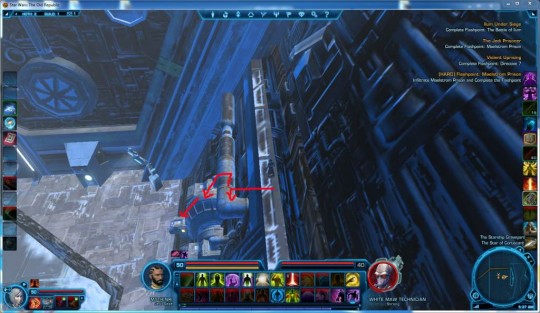 As we mention next, have the person who got the “depleted datacron” from the Ancient Probe droid you fought earlier simply right-click the Coupled Recharge Station. After a few seconds, the datacron will become available. 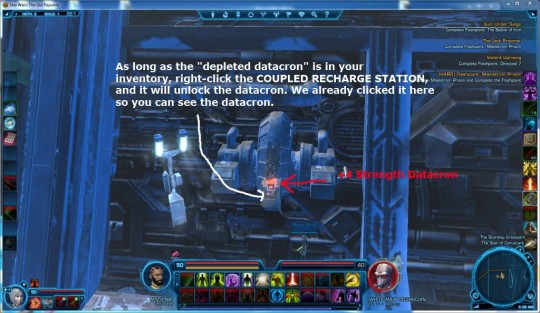 If you're in a party, make sure everyone grabs it! The datacron is only unlocked for a little while, and if somebody misses it, they'll have to go back and kill the Ancient Probe again. That would not be fun!

Congrats on the +4 Strength – the toughest datacron on Hoth. The others are easier, so if you haven't finished them all yet, why not do so now? Just click on a button below to get started!

Want to see the main Hoth map again, showing all the datacron locations? It might make it easier to pick the one you want to do next. If so, click the button below!