The presence datacron is easy to get to – however, there's a mean level 34 ELITE with 75k hitpoints in the way – you'll either have to avoid the elite (possible if you're a stealther or are ~level 36), bring some friends to kill it, or simply death-run through it and use your medical probe to revive just past it.

If you can't avoid the elite, a death-run is quite easy. It's what I usually do, and since it works just fine, the datacron keeps it's difficulty rating of “easy”.

Start by taking a taxi to the Lower Sundari Outpost in the Sundari Flatlands region. If you finished your quests on the planet, you probably already have the taxi path. If not (and if you're not sure where the region is), check out the world map on the main Balmorra page. 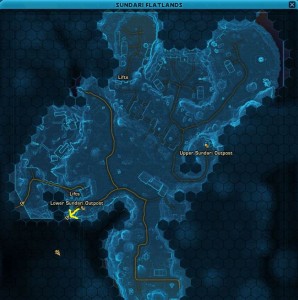 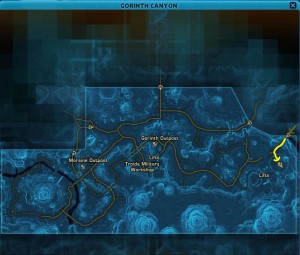 From the outpost, follow the arrows above. You're basically taking a quick walk south-west into the Gorinth Canyon region. Click the maps above if you need a larger view.

Once at the position shown above you'll be near a medical droid (look for the vendor in your minimap if you're having trouble narrowing down the location). Things should look as follows: 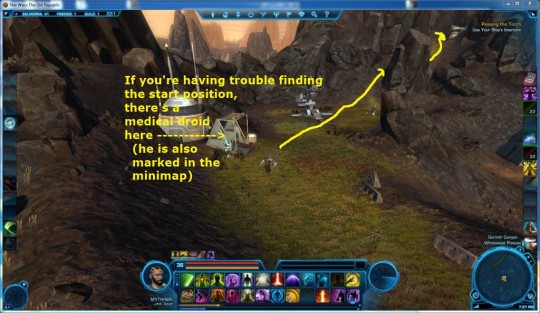 Click the above image for a larger view – you're now going to be heading up a somewhat-hidden path.

Once you've travelled the path, you'll see a 33 elite droid pathing around. Generally you should be able to avoid him, though you might be able to kill him if you'd prefer. 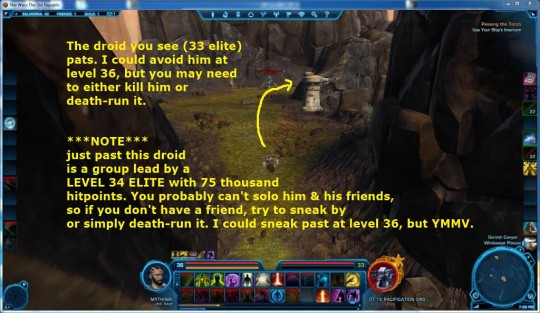 After the droid, you'll come up with a camp of 3 – one of them is the 34 ELITE mentioned earlier. He has a lot of hitpoints, and it's unlikely that you'll be able to solo him unless you're a high level. Your options are as follows:

Most people will chose option #3 – I usually try to sneak by, and if I aggro, I just run as far as I can before I die.

Once you've passed the elite (by whatever method), you'll see the datacron immediately: 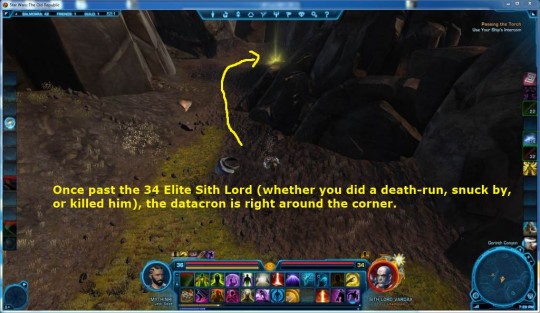 It's simply a matter of walking up and taking it.

+4 Presence! Your companions are just a little bit stronger now!

If you haven't grabbed all the other datacrons yet (this is usually the last one though!), feel free to check them out now using the buttons below. Otherwise, why not head back to the main page and take a look at the datacrons on another planet?