The Endurance datacron on Quesh isn't actually that hard to get to. There are buttons to press and then it's a race against time which can be a little fun. So why does it get a hard rating? Well, you'll need to pull out your healing companion. And you'll probably need to use a medpack. And if you die, you are forced to release to the Med Center in the main Republic base (you can't use a medical probe), which means a lengthy run back.

This one is easier with 2+ people, though it's often solo-ed. It does require you to be quick though.

The datacron is located in a cave. The cave is pretty easy to get to, and has 2 entrances as you'll see in the map below: 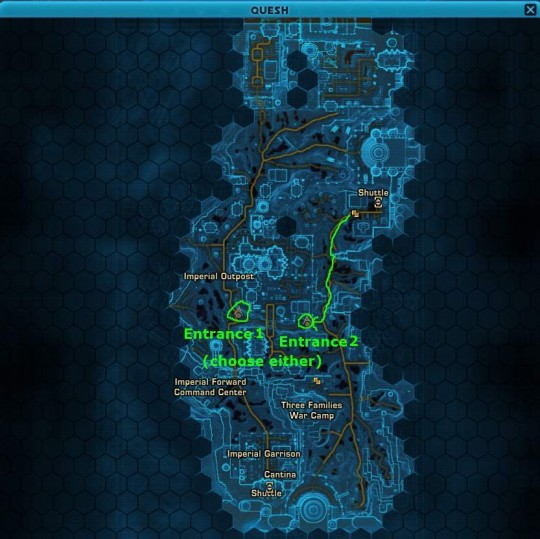 Pick either entrance – it makes absolutely no difference as they both go to the same place. Chances are that unless you happen to be near the Imperial side of the map, you'll take Entrance #2 (Republic side).

Both entrances are shown in the images below (click on either for a larger view). 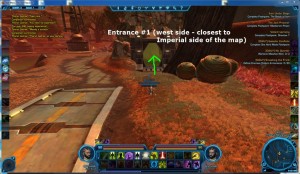 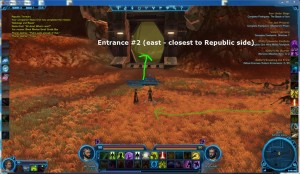 Regardless as to which entrance you picked, head inside.

Now you're in the caves, called the Yuna Crosscut. Use the map below to get into the circled position. Most of the mobs are neutral, though you'll probably have to contend with a couple Level 37 Strong mobs. 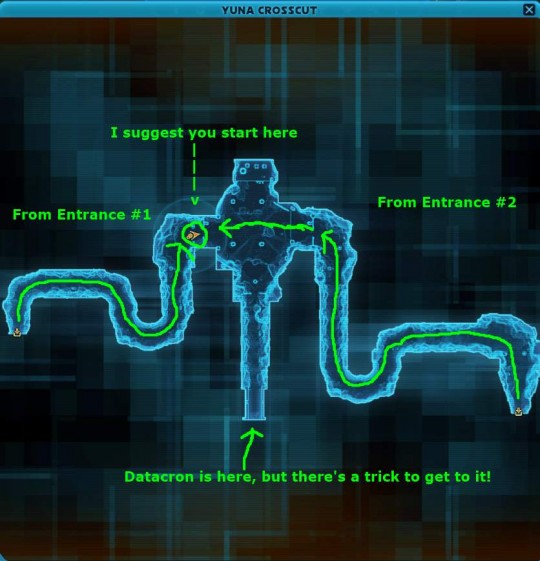 The datacron is pointed out in the map above, but is blocked by a forcefield.

Head to the circled spot, and you'll end up near a doorway containing a switch. I suggest starting at the circled location – there's technically another place you can start, but I recommend against it (it's further away from pillar switches you need to reach while poisoned – undoubtedly part of all that BioWare favors Empire stuff I keep hearing about :p ).

This is a view of the door with the switch. 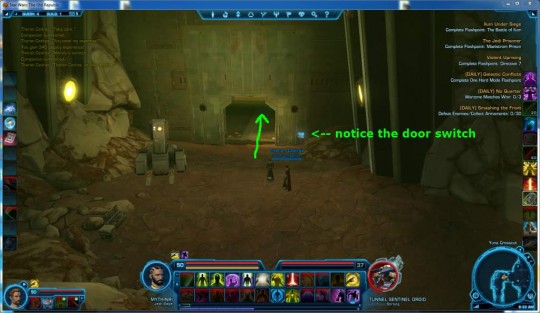 Right now, the door is open. If you press the switch, a forcefield comes into place and blocks it. You can press it now (don't go inside), and see what happens if you'd like (though you'll be locked out for a couple minutes).

Otherwise, head inside and look around a bit.

AT THIS POINT I RECOMMEND READING THE REST OF THE GUIDE BEFORE YOU ACTUALLY DO ANYTHING!!!

You may also want to walk inside the room mentioned below and do some “practice runs” (without actually hitting switches) so that you can do it as quickly as possible without dying when you try it for “real”.

As you see below, there are 2 steps. 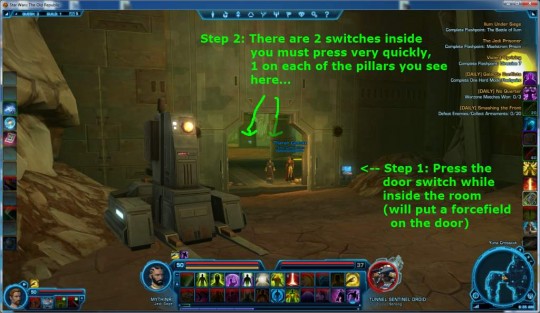 Before you start, it's time to pull out your healing companion (even if you're a healer yourself). 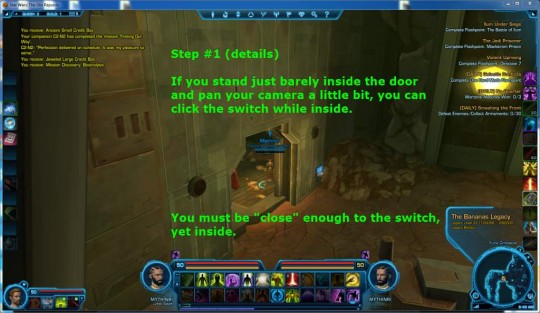 If you're going to solo this, you have to step just-inside, staying near the switch, and pan your camera so that you can see/click the switch. Basically, you're simply near the switch – just on the opposite side of the wall. If you're in a large group, 1 person can stand outside & hit the swtich while the others are inside, but you may as well all head in and do it together anyway.

As you can see below, I died from poison while swapping between programs to take a screenshot. 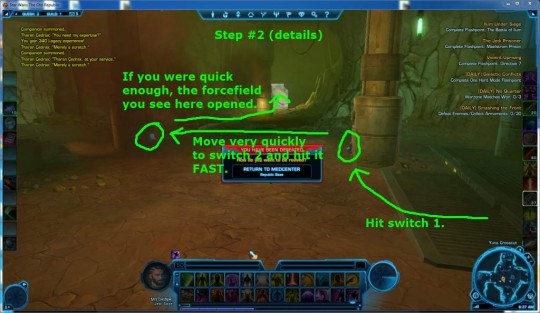 As soon as the forcefield locks you in, poison fills the room and you start losing health. To turn off the poison and open the door to the datacron, you have to hit both of the pillar-switches you see circled above (at as close to the same-time as possible). Once both switches are activated, follow the final arrow to the doorway that had a forcefield blocking the datacron.

I won't lie – This is tough as a solo-er because they're both supposed to be hit at the same time. Fortunately if you're quick about it, you can click one, walk to the other immediately, and click it in time.

If you're not fast enough in hitting both switches, you can keep trying until you die. A few tips if you're having trouble:

If you die, you're forced to release to Med Center which happens to be all the way back at the Republic base.

Assuming you made it, once the forcefield is down and you've followed the arrows in the image far above, you can head to the datacron: 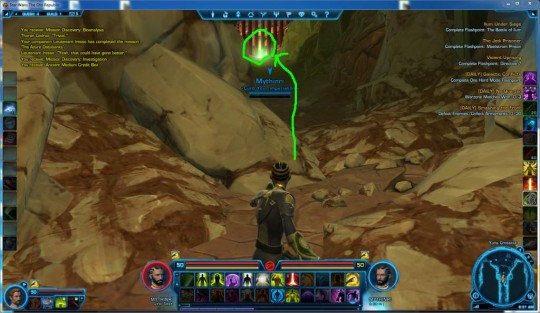 I'll quickly mention that you don't want to wait too long. After you've hit both pillar switches, the forcefield to the datacron is only down for a short time so head to it quickly.

Grab the +4 Endurance, and you're set! If the forcefield came back up, there's another switch that will let you back out (and you won't have to deal with poison this time).

Hopefully you got the datacron, and hopefully it didn't cause you too much trouble.

Ready for the next datacron on Quesh? Hit the appropriate button below!