So much pain, for moderate gain. That pretty much sums up this mod.

Bringing in some cool air was the goal. The MacBook Pro doesn't have cold-air intakes (it largely recycles warm air, relying on the aluminum to absorb it and spread the heat). I decided to add some.

The first thought was that drilling holes in the bottom panel below the heatsink fans (to essentially create an intake grill) would be a good way to directly pull in cool air. Unfortunately, there was a big problem… the  4 feet on the MBP don't really elevate the bottom of the case. The other problem was that even if I modded/heightened the feet to elevate the machine, the grill would be completely blocked if the machine was ever used on the bed.

After weighing various possibilities, I decided to take the bottom panel off and use a dremel to cut the edges in a few locations that looked like they'd feed into some good airflow locations. A few things I tried to keep in mind:

Long story short, the end result was this: 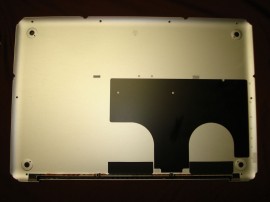 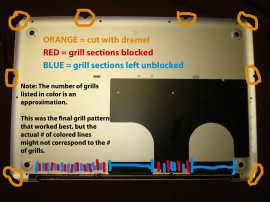 As far as the details as to why each cut was done where, since the heat comes out the rear (bottom in the pic), I put 4 cuts at the front – idea being that cooler air will be present there. There was only 1 viable option for the sides (between hard drive / superdrive and between battery / motherboard), thus the side-cut positions. The rear corners were done for symmetry, and because the corner near the power input gets quite hot under load, so I wanted some airflow there.

I'd experimented blocking off different vents. The fan exhaust vents were kept clear (don't want to stop the warm air from getting out!). At one point, I tried blocking all the others that could be used for intake (to force fresh air), but temperatures actually went up in testing. In particular, air still needs to flow in the space between the 2 fans – while it's going to be virtually 100% recycled heated air, it flows over the heatpipes and the CPU/GPU blocks.

The final outcome is what's shown in the above image, and is what worked best. Every-other space in the grill is blocked (except for the spaces in the exhaust vents which are all left open). This worked out to be the best trade-off – the entire grill still sees heated air (and carries whatever it absorbs to the body), but enough vents are blocked that it creates a small vacuum. Without a vacuum (negative air pressure), air wouldn't be sucked in through the cutouts, so they'd be doing nothing. 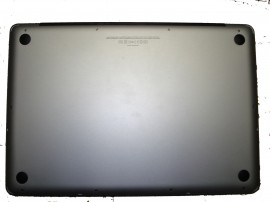 Above, you can see what it looks like with the bottom panel re-attached. Not a pretty sight, but not really visible when the machine's in use.

I can make this fairly simple without needing a chart, though I may add one when I get some time (since I've been keeping logs with each mod, I may as well use them).

CPU and GPU load temps were unchanged. By “load” here I mean Prime95 (CPU on Mac OS X) and Furmark (GPU in Windows).

OCCT (Linpack) on the other hand showed an improvement. It capped at 93˚ this time (down from 97˚), dropping a bit lower once the fans had finished catching up.

Everything else dropped at idle. Actually, every idle reading with the exception of  ”enclosure base” dropped exactly 5˚C from the previous numbers in Mac OS X (I'm actually quite shocked that it was exactly 5˚ in each case looking at it now). This includes CPU, CPU Heatsink, HD, and GPU. “Enclosure Base” (darn you for being an exception!) only saw a 2˚C drop.

In Windows, the idle temps didn't move at all (I'm not sure why… not even a 1˚ difference). Temps reported in Windows do bounce around like crazy at idle though… I'm not sure if it's Win7 swapping what cores are being parked or what, but it's pretty hard to get consistent numbers there for whatever reason.

Changing the airflow characteristics was a fairly major mod, with some moderate results:

I'm quickly realizing that 80-84˚ is the range where the MacBook Pro is “happy”. What I mean by that is as follows:

Thus, any improvement in cooling seems to mean the fans just go slower. Unfortunately I haven't been logging the fan speeds at load (only at idle – silly me), so it's tough to quantify what the improvement there might have been.

The good news is, at this rate I'll probably end up with a silent machine at load. It'll be running at 83˚, but it'll be dead silent! :p

In case you missed it, my previous thermal paste replacement to reduce temps on the Macbook is here < Back to Main