I'm in the process of testing various games, but here's what I've got so far. Note that right now there appears to be a driver issue, where having vsync on will cause games to get “stuck” at 30fps periodically.

Min FPS: This was taken standing still in a “busy” area of Stormwind (standing on the steps of the bank, facing the fountain & auction house). This area provided consistantly low frame rates.

Max FPS: This was taken walking back and forth through the Stormwind entrance (an area with generally high frame rates), watching the FPS and taking down the highest number.

I didn't try to come up with an average, because it really wouldn't be accurate, or terribly helpful. If you're questing, you're probably going to hit closer to the max. If you're doing 25-mans, probably closer to the min when all the spell effects are going on around you. Other times, somewhere in between.

WoW Observations: High was very playable, although periodically when it dropped closer to the minimum FPS it wasn't smooth. Good seemed to be more consistent, and is probably what I'd use if I were playing the game on a regular basis. Technically, Ultra is playable, but by “playable” I mean it's not a slideshow. It's visually painful, and the frame rate reminds me of years ago when I was playing games on integrated graphics. I wouldn't recommend it for anything beyond screenshots.

WoW, like Blizzard's other games are well-tuned for the Mac OS, and the 15″ MBP handles it quite well. You won't be playing on Ultra, but you'll be able to pull off medium-high settings at respectable frame rates.

Note that it suffers from the driver glitch mentioned above, so if you have vsync turned on, your FPS will periodically drop to (and get stuck at) 30fps. It seems to be certain character effects that trigger it. To reproduce, log on to a busy server and face the mess of people near the AH in Stormwind. Moving your character to another location (facing elsewhere) will fix it. Alternately, you can play with vsync off, but you'll get a little screen tearing. Hopefully Apple patches the driver soon, as vsync on would normally be ideal. 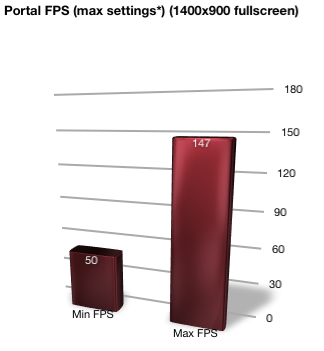 Testing: This was done on Level 2. It was clear very quickly that the FPS by default was in the hundreds. Since anything above 60fps is generally “gravy”, I cranked up everything in the video settings to max. That means 8xAA, 16xAF, motion blur on, etc. The only thing left at default was “render depth” which stayed at “2″.

Portal Observations: Valve created native OS X versions of their games, including Portal. It works quite well, and really screams on the MBP. You may as well turn everything up (except render depth), and you'll be sitting well above 60fps most of the time, well above 100. If for whatever reason you want portal depth cranked up, you'll probably want to turn something else down to keep the high frame rate.

Portal also suffers from the driver bug (where fps drops to and stays at 30fps for a while if vsync is on), but it's not as frequent. Again, hopefully the driver's patched by Apple soon.

Sorry, no charts or frame rates (I'm unaware of any FPS tools built into the game, and don't have XCode installed to check the other way).

That said, I gave it a try, and it works very well. All the visual quality settings can be cranked up to max at native resolution (1440×900), and the game's perfectly smooth when zoomed in, when side-scrolling, and when watching a battle. The only time the visuals were at all choppy (at max settings) was while scrolling while zoomed out half-full.

If you play zoomed-out, you may want to keep the settings around the medium level. Otherwise, feel free to crank everything up. Aspyr did a really good job with this game – the only reason to every play it in Windows is for the earlier patches – from a playability standpoint the OS X version's top-notch and does really well with the MBP's 6750m.

I know, it's a popular game and I should already have it. I'll be grabbing it soon to test.

As mentioned in the Dragon Age II: Mac vs PC article, the Mac version is a Cider port, rather than a true native Mac OS X game.

I took a quick look at it on the MBP with the 6750m, and it played reasonably well. There's no built-in FPS meter, but I'd ballpark the section I played as being in the 40-60fps range at “high” settings (defaults for AA/etc) at the native resolution (1440×900). Note that “high” in the Cider port is equivalent to “medium” in Windows, so it's a little less exciting than it looks.

In short, if you can deal with the DX9-equivilent quality settings and less than a solid 60fps, the OS X version of DA2 will probably be fine for you with the MBP – it should be sufficient for the “casual” gamer. If you're willing to BootCamp into Windows, you can expect higher framerates with the Windows-version, as well as additional higher quality settings – likely more suited to the “hardcore” gamer.

Hopefully EA/BioWare take a page from the Blizzard/Valve playbook for their future games and start developing quality Mac products, rather than pumping out budget ports. Note that the game itself is great – it's just worse on the Mac than it is in Windows, which is a shame.