Perhaps the most dirty and dreaded form of industry in the game. The pollution powerhouse of just about every city simulation game…. Heavy Industry. 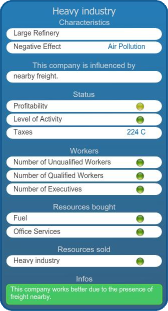 Heavy industry is just a fancy way of saying dirty industry. Unfortunately it’s a necessary evil, even in the game world. In Cities XL it’s more than just a stepping stone – if you plan to have manufacturing or high-tech industry, you’ll need the raw materials that heavy industry provides.

Build these factories far away from civilization if you can. The pollution expands/spreads, and there’s little that can be done to reduce it. There are very few buildings that will tolerate the pollution spreading towards their area. In fact, the only ones who don’t mind the permanent clouds in the sky tend to be other polluters such as the manufacturing industry, power plants, garbage dumps, and oil rigs.

Where should they go? You probably want all the big polluters packed into a corner somewhere, or with their own dedicated section. Either the corner of the map, or an edge is generally the best place, because part of the pollution will run off the map. Make sure they have access to freight lines running out of your city – generally if they’re near the edge they’ll be near a road running out, but if you’ve placed them towards the middle of your city for some reason, make sure there’s clear roadway going out (or better yet, access to a harbor).

Even though you’re going to want to keep these away from residential, don’t forget that workers still have to travel to work! Ensure your road network is up to the task.