One of the more simple industries in the game is the food industry. Most of the buildings are farms, and as you might suspect, they create food. 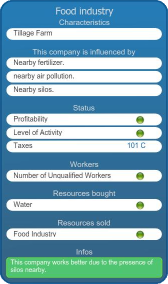 Tip: You can only build these if your map contains fertile areas (one of the four possible resources when you create your city). If you chose a map that does not contain fertile areas, the only way to obtain Food Industry is by trading with others through the game’s Marketplace.

Generally, when you start your city you’ll want to see where your fertile areas are, and save that land for Food Industry. Plan accordingly – farms don’t like pollution, so don’t build any dirty industry near your fertile areas.

Once you start building your farms, note that you can build a Silo for every 10 farms you have.

Farms can be a little tricky to build – if the angle isn’t right, it won’t let you build it. Farms also have a minimum and maximum size, so you may have to experiment a little and do your best to make sure you don’t end up with small unused spaces.

Big or small? A little testing showed that although the income often varies widely (for no apparent reason), the income farms generate tend to be proportional to the size. That means there’s no direct financial advantage whether you make them small or make them large – it’s the total land area that will matter. However, you do get a Silo for every 10 farms. Many smaller farms will obviously give you more silos than fewer large farms. That said, each farm is surrounded by a road, which means many small farms will waste more real-estate because of all the extra roads that are created. Your best bet may be to just build reasonably, and focus more on utilizing all the space available, while maximizing traffic flows.