Citizens need nearby stores, which is where retail comes in. 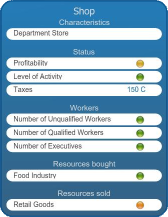 The concept behind retail in Cities XL is pretty straight-forward. Residential buildings simply want shops nearby, which makes sense. If somebody’s got to drive across the city for a loaf of bread, they’re not going to be as pleased as someone who only has to walk across the street.

Retail doesn’t pay a lot in the way of taxes, but they pay enough to carry their own weight. They don’t particularly care where they are, although you’re going to want to build them right smack in the middle of residential areas to get the most benefit out of them.

Unfortunately, retail is currently very hard to balance. The problem is, it’s very easy for retail shops to have problems selling their Retail Goods, giving the message “Retail goods are too hard to sell. Decrease production!“. At the same time, you may have areas of the city where residents aren’t happy because retail is too far away.

The best way to balance retail is to build SINGLE units (not blocks) of LOW density retail, and spread them out as well as you can amongst your population. Once you’ve got good coverage, if your retail isn’t having problems selling, feel free to step up a couple buildings to medium or high density. Do it very gradually – one at a time. It’s very easy to quickly end up with too much retail with the addition/change of even a couple buildings, particularly when your population is below 500,000.

Retail buys Food Industry (from your farms or from tokens), and produces Retail Goods (which do not have tokens – it’s local demand).