This site is essentially a full review of the TomTom XL 330S GPS. A TomTom was purchased from a local store (incorrectly advertised as the TomTom ONE XL 330GPS), used, and tested.

Where other sites tend to focus on... well the same specs you'd find on the manufacturer's website, this site goes above and beyond that. You'll see images of the various GPS options, get an idea as to how some of the features work, and more!

Before we continue, here are a few images of some of the various TomTom displays as viewed on the 330S GPS.

The TomTom XL 330S is packaged in hard plastic "clamshell" packaging, also known (inaccurately) as "blister pack". Yes, this is the nightmare stuff we've all seen that can slice your hand open if you're not careful. In fact, acording to a wikipedia article, 6000 Americans are sent to the ER each year by opening them (not the TomTom's in particular, but hard plastic clamshell packaging on the whole).

I hate this stuff with a passion. What's worse is that the TomTom packaging is extremely hard to open even for this packaging type. The tip of a razor-knife broke off in the plastic, and I spent a good 5 minutes with a pair of scissors butchering the package trying to get it open - there's simply no room to properly cut it open with scissors. You basically have to jam the sharp edge in somewhere and try cutting at an angle. Did I mention I hate this stuff? 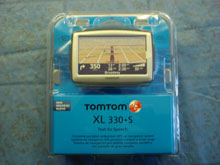 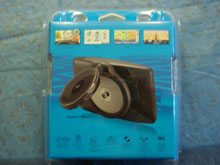 On the plus side, the clamshell packaging is a nice security feature. Sometimes you open a box and wonder if it's been opened/returned in the past because things don't seem to be "stock" (and indeed sometimes items are returned and not properly checked). No worries with the TomTom in this regard - you'd know if someone even tried opened it beforehand, so you can be relatively certain your TomTom is fresh untouched from the factory and everything that should be in the package... is.


Once the package is open, this is what we have inside: 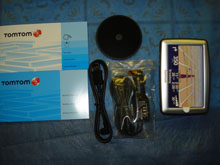 The user guide isn't a full-fledged manual. Instead it's a more of a quick-start guide, although it does have 20 small pages of info to help get you going. If you want the manual, you can download it through the free software package offered at TomTom's website.

The TomTom's mount is basically part of the GPS. You could technically separate them by taking out a couple screws (although that would be silly!), but for all intensive purposes, it's one piece as you see here: 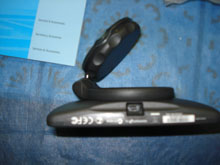 This is one piece. The suction-cup/dial you see can be pivoted to expand like seen, or to compact for slim storage. The entire mount assembly can also be rotated, but there's no way to completely detach it from the GPS unit itself unless you start unscrewing things...


The good news is that it compacts quite well for having the mount built in. While heavier and bulkier than a separate GPS, if you plan to take the mount with you it's actually more compact than other GPS's that have separate mounts. Taking both the GPS and the mount off the windshield when you leave the car is also shortened down to 1 step since it's 1 piece.

The bad news is that:


Mounting for the most part is simple. Stick the thing against the windshield, turn the dial to lock it in place. Removal is the opposite of installation! Nothing to clip or detach. To it's credit, the suction cup also has 2 little "tabs" to grip which makes removal a bit easier too.

The TomTom has a cigarette lighter adapter for power, which plugs in to the bottom. It's a decent location, making it pretty easy to attach/detach whenever you want.

There's also an included computer mini-USB cable. If you'd prefer to charge it indoors, you can hook it up to the computer via the cable and let it charge that way - a nice little benefit. Note that the cable can be used for computer software stuff as well (updates, maps, points of interest, etc), but we'll get into that later.

A detailed manual isn't included in the box, but you can easily get it online by downloading the TomTom software.

The first time you start up the TomTom XL 330S, you're brought through a series of initial set-up questions. There are also a bunch of guides/demos/walkthroughs you can choose to watch or skip.

This process is very easy to understand - there's a lot of information presented. Total time until you're up and running can be fairly quick if you skip the demos, choose the default voice instead of testing them all out, etc. Most people new to the TomTom would be wise to take their time though - it's not just a set-up process, it's also a learning process. The TomTom is full of features and learning how to use everything from the start can save you a lot of time later on.

The main screen is the map.

Both these images have destinations already set. Touch anywhere in the main section of the screen to get to the menu.

As you can see, there's a lot of information shown. Towards the bottom left, the distance until your next manouver is shown along with an arrow in the direction the manouver will be. The other section along the bottom shows a variety of things - the distance and time until you reach the destination, the current time, and your speed. If the speed limit is known by the GPS, it will list it. For example, in the left image the speed says 86/100 which in this example means you're going 86km/h and the max speed limit is 100km/h. Whether the display is km/meters or feet/miles is set in the options.

Press the main part of the screen, and you'll go to the menu where you can set your destination, change preferences, etc.

Press the area that shows the distance and direction of the next manouver, and you'll get the volume control - an odd place for it I'll be the first to admit.

Press the other bottom portion and you'll get a massive overhead view of your entire route - similar to the one you'd see if you were looking at a normal paper map and had marked the path you're taking with a marker. From there you can also see what satellites you're receiving data from in the event that it's something that interests you.

Main Menu - In any case, most people will start with the menu. Here's what it looks like:

There's no back button - the menus are set up to always hit next. It's easy enough in an area with 2 pages, but when you get to more than that, it gets a little cumbersome if you accidently zip by the page you want since you'll have to scroll through them all again to get back to it.

Navigate to... Address - Most will be navigating to an address. Choosing "Address" brings you here:

Navigate to... Point of Interest - For those who choose to head to a Point of Interest instead, you first choose where to begin the search (near your current position, in a city, along the route, near your destination, or near home). You can then pick from a category (restaurant, gas station, hotel, theater, or any of the other 55 categories) or search for a particular one you have in mind.

Where the point of interest portion of the XL 330S falls short is that you don't get addresses at a glance (once it lists the actual locations). When results show, they simply show distances and directions until you actually choose them, at which point you do get the address, a view of the location on the map, and the ability to select it.