Help Me! - The Help Me section is pretty well thought out. You can see it here:

Change Preferences - If there's one thing you'll never hear me say, it's that the TomTom has a lack of customization options. It has tons. Here they begin:

Night Colors - Switch the color scheme to day or night.
Show POI on map - Choose which points of interest show up on the map as you get near them.
Safety Preferences - Everything from speed warnings to school/church zone warnings to suggesting driving breaks and more.
Guided Tours - Not familiar enough with the TomTom? Guided tours with pictures that go step-by-step to help you learn how to use the device
Turn Sound Off - I'll give you the benefit of the doubt here :p
Volume Preferences - An awesome little nugget here - you can link the volume to the car's speed. So on the highway it'll be louder and when you slow down it'll get quieter. Nice way to beat road noise.
Manage Favorites - It's grey in the pic because I have none set yet.
Status bar preferences - Want to simplify the main map screen? You can move the bar to a vertical position instead, and add/remove indicators. Don't want the current time distracting you from reading the other stuff? Uncheck the box! Same goes with most of the other stuff.
Change Voice - Don't like the voice you picked when you set up the unit? Test them all here and choose your favorite.
Manage POI's - Add/Edit/Delete 'em. You can also add or remove categories. If you'd like to set up a warning when you approach one, you can do it here.
Turn on 2D display - don't like the 3D view? Change it to a 2D map.
Name preferences - show house numbers before street names, show street names, show the next highway/signpost, or show the current street name on the map.
Change Home Location - self explanatory
Manage Maps - Delete/Switch maps, and download maps or free map corrections.
Planning Preferences - You can have the TomTom ask you each time you plan a route, or choose a default - fastest, shortest, walking, bicycle, limited speed, or non-freeway routes. You can also choose how you want toll roads handled on a following screen
Change language, Set Owner, Operate left-handed, Brightness Preferences, Change map colors, Set units, Set clock, Keyboard Preferences, Change car symbol, Reset Factory Settings - I'm sure everyone will figure these out, so I'll save you from reading a page of boring.

Here are just a few screens deeper within the preferences section for those interested:

As you might guess, the options are extensive. Five pages makes things pretty cluttered though. Some of the option menus probably could have been combined, or set up as a single option with multiple option pages. It does offer something for just about everyone though.

Map Corrections - I'll briefly touch upon this main menu option. A common annoyance is that when something is wrong or missing, many GPS's don't let you do anything about it forcing you to simply home the next map update has it fixed. TomTom seemingly put a lot of effort into making it easy for you to make corrections yourself. You can:
-Block/unblock streets
-Reverse traffic directions
-Edit street names
-Change turn restrictions
-Change road speed
-Add a missing POI
-Edit a POI
-Report an existing or missing street
-Report an error with a city (missing, wrong name, alternate name, other)
-Report a POI issue
-Report a Highway entrance/exit
-Report a zip code
-Report a roundabout
-Report something else

That's really an awful lot you can do to fix up your map to be perfect. You can also share your corrections with others for free, and get corrections others have made for free.

This is basically a community-wide free service. It can be tough for one company to get everything 100% right and 100% updated all the time - but an entire community of people... now there's a force to be reckoned with!

It's a very impressive feature, and again, it's free.

TomTom's XL 300S is both feature-filled, and customizable. Of course that's not always a good thing. Those old enough to remember how VCR's progressed know that they went from something simple to figure out, to something where you actually needed to read the manual to get the thing to turn on, all in the name of "more features".

OK, well that's an extreme example. The TomTom's feature filled, but it's still easier to use than a VCR. One thing it has is a pretty extensive bit of information available on the device. You'll often get the feeling of being "walked through" steps along the way, and there's a lot of information available in the help section. There's basically a mini-manual built into the thing.

If that's not enough, you can get the manual for free through TomTom's free software. In fact, TomTom's software has a LOT of functionality.

For anyone who likes a device that integrates well with the computer, TomTom's really figured it out well. You download one software package, and you can do everything from sharing maps, to obtaining new maps, to checking the manual, to downloading custom POIs, to... well much much more. All from within the same program. A lot of thought was put into this aspect of the GPS and it's really well done.


But let's get started, shall we?


TomTom includes the mini-USB cable needed to hook the GPS up to your computer. Download the software from TomTom's website, install it, and then hook your GPS up.

One of the first screens you get is an update screen. Yes, it's ready to pump you with some optional updates right away: 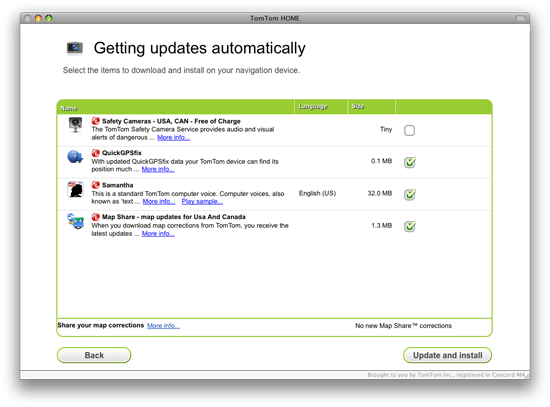 You'll notice a few things here. All 4 are free. Clicking "More Info" gives a good bit of detail about each one. Note that free space on the TomTom XL330S is limited - you'll typically have between 40-60mb of free space and a new voice will take up a huge chunk of that. 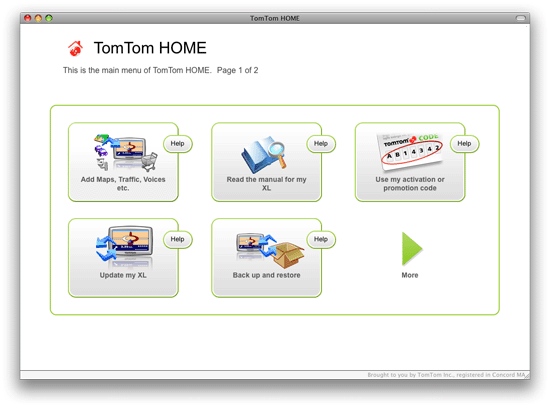 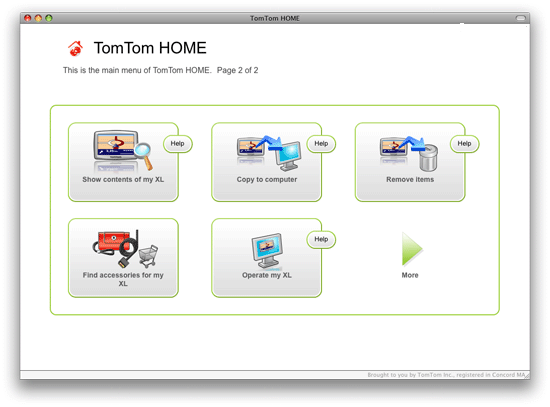 Note that these have changed slightly in a newer version of TomTom HOME. This probably could have been organized by TomTom a little better to make it more compact (however it's now the opposite, spread across 3 pages instead of 2!). To narrow down the stuff you're likely to use, you've basically got:
-Add Maps, Traffic, Voices, etc
-Update my XL
-Read the manual for my XL
-Operate my XL
-a bunch of other stuff mostly related to interacting with the files on your TomTom 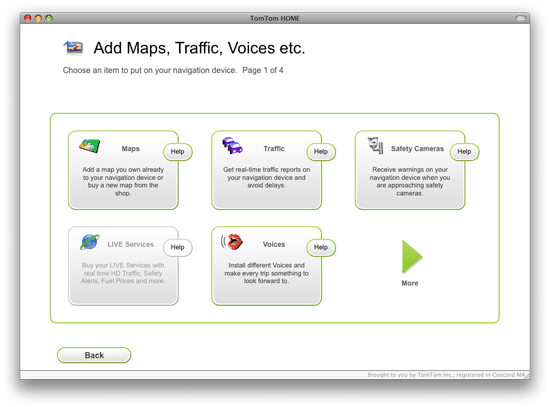 There's a lot more detail in each of those options, and I won't go into the other main menu options, but suffice it to say, there's an awful lot available. A huge plus for TomTom.

It's worth noting that while the shared map updates are free, if you want the quarterly maps made by TomTom, there is a fee. You can either pay yearly, or buy maps individually. If you're travelling to another country, you may very well have to buy the map for it if your TomTom doesn't include it already. Here are the current prices for the paid maps. Here are the last two screenshots for this section: 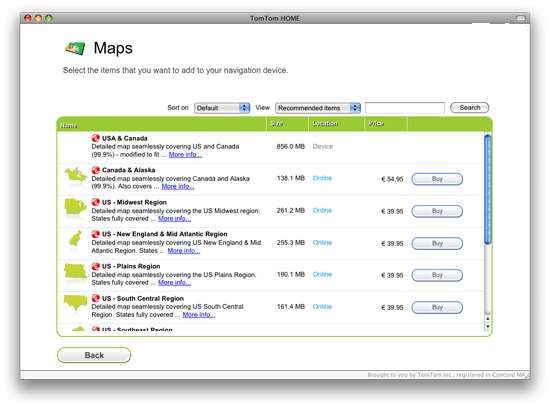 You don't have to get updates if you don't want to. This is simply shown for reference for those who do. As you can see, I already have the latest USA/Canada map (you currently get 30 days from the time you hook up your GPS to do so for free). Quarterly works out to be the best cost, unless you'd prefer to update your map every 2 years or more in which case single updates make the most sense.


TomTom's focus on features didn't stop at the GPS itself - it went on to include the software package so that you can interact heavily with the device from your computer. What I've listed here really only scratches the surface. The community's pretty strong and updates/features do happen on a regular basis.

The one downside is in fact the lack of memory. You won't be able to put much on your TomTom because the GPS software and default map take up most of the 1GB offered in the XL 330S. You should be able to do all the free user map corrections etc since they're really quite small, but if you start getting into extra voices and a lot of the "fancy" stuff, you'll run out of space very quickly.


Overall the software end by TomTom is a job really well done.

The TomTom XL 330S GPS is a pretty solid feature-filled product all-in-all. Breaking things down though, here are some positives and negatives:

Strengths:
-Very feature-filled
-A lot of customization available
-Plenty of information in map-view including near-by POIs
-Typing in locations, the top 2 results dynamically display as you type.
-Very strong and feature-filled on the computer software end.
-Impressive re-calculation of routes.
-Simple to make modifications/fixes to the map or points of interest, which you can share with others.

Weaknesses:
-Mounting is a little cumbersome, and device can be bulky
-Only 1GB of included memory, very little of which is free (limiting expansion). No expansion options.

Final Thoughts:
The TomTom XL 330 GPS really excels in the quantity aspect. There's a large degree of information, options, and customization available. While the interface has a rather "busy" feel to it which may overwhelm a few, the degree of help/assistance is quite good. The computer software integration is very impressive as well. Where it falls a little behind is in the physical design itself - 1GB of included storage memory isn't a lot, especially with almost all of it already being taken up. Why TomTom didn't add more memory (which is cheap) or add an expansion slot is a little puzzling. An integrated mount can be a good thing, but finding a way to make it detachable would have been a nice addition.

Those looking for something a little more simple with focus on the basics, you may want to look around a bit before settling on the TomTom. That said, those looking for a device with extensive customization, information, and plenty of options, look no further - TomTom's where it's at.