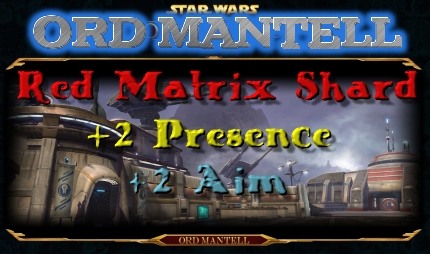 Ord Mantell is the starting planet for the Smuggler and Trooper, and contains 3 datacrons. They can be obtained while solo on the planet, though 1 is in an elite area for which you may want your companion.

Here are the locations on the main map, and the path you'd take to reach them from the nearest taxi… 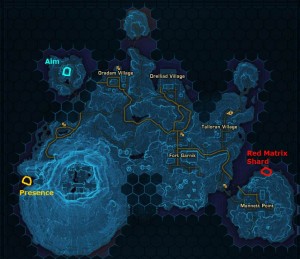 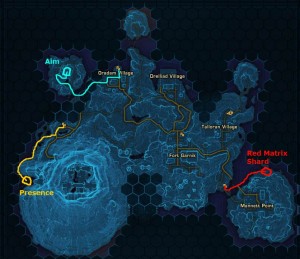 (click on an image above for a larger view)

Note: A level 6 ELITE mob is guarding this datacron, so you may want to wait until you're level 7 or higher before attempting it, and may need to use a medpack.

From the Falks Reach Speeder, (the red starting point as seen in the map above) cross the water and get to the beach on the other side, heading NORTH. If you need a larger view, click on any of the images below. 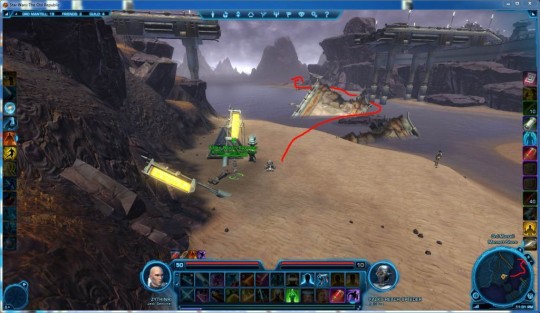 Note that if you veer too deeply into the water, you'll reach an “exhaustion zone” and begin to die.

As long as you cross in shallow water, you shouldn't have a problem. 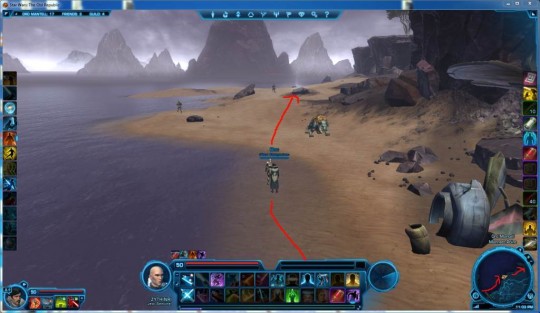 Continue following the beach as seen above. In fact, we can already see the matrix shard glowing in the distance. 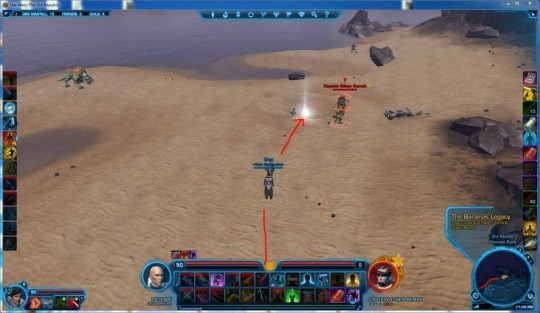 Above, you can see the level 6 ELITE guarding the datacron. He's not very challenging, but as mentioned earlier you may need to use a medpack during the fight. Once he's out of the way, grab your Red Matrix Shard!

The Presence datacron in the southwest region of Ord Mantell is easy to get to – it simply involves a lot of walking.

We start at the Volcano Camp Speeder as shown in the image below (use the map at the top of the article to find the yellow path if you're unsure where it is). Again, you can click any of the images for a larger verison. 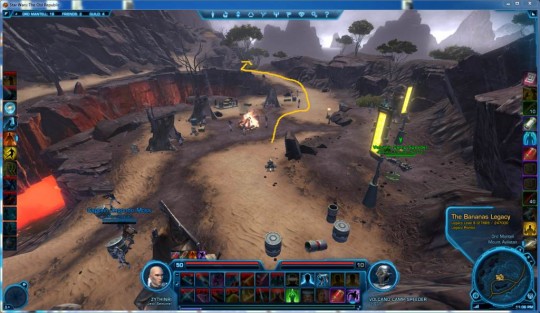 Take the path south-west to bring you towards the beach. 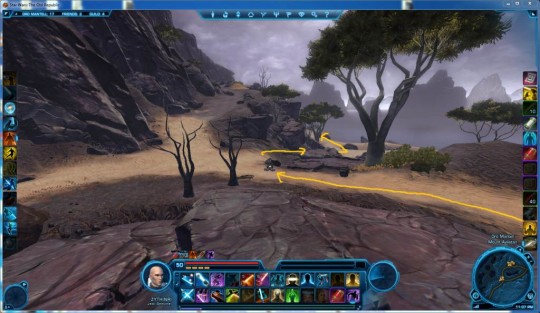 Once at the beach, you're making a left turn and taking a little journey south, following the beach. If you're doing this datacron before you have your speeder, it'll feel like a very long journey. 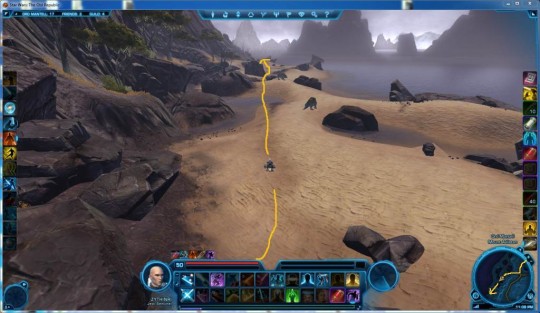 Below, you'll see we've just passed the peninsula and can see the glow of the datacron hiding just behind that rock. The glow can be tough to see, so be careful not to miss it! 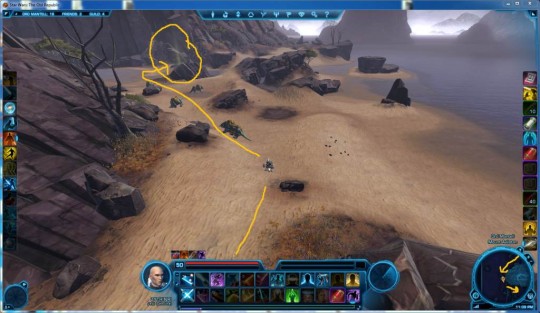 Below, we've reached it. 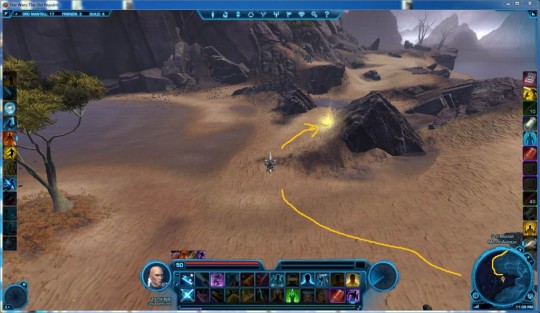 Grab the +2 Presence Datacron, and enjoy the feel of your companions being just-a-little-stronger!

Note: While listed as “easy”, this datacron is contained in a heroic area, and there are a number of level 7-8 STRONG and ELITE mobs. If you aren't in a group for the heroic quests here, you will probably want to wait until you have your 1st companion before doing this and would be best to save this datacron until you've finished the rest of Ord Mantell.

We start at the Oradam Village Speeder (find the light blue line in the map at the beginning of the article if you're not sure where it is).

Follow the light blue line below to exit the village. 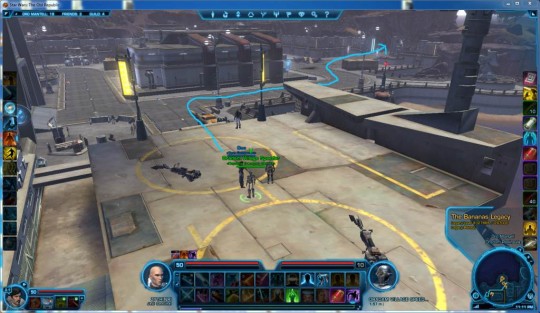 Below you'll see we're about to exit the village, and will follow the road turning left. 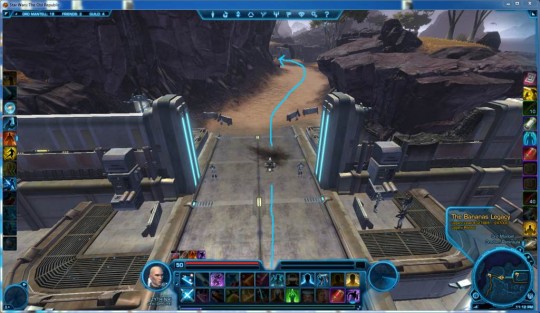 We've turned left below, and you can see the path you take. You'll start running into the STRONG and ELITE mobs once you cross the river, so be mindful of your surroundings! 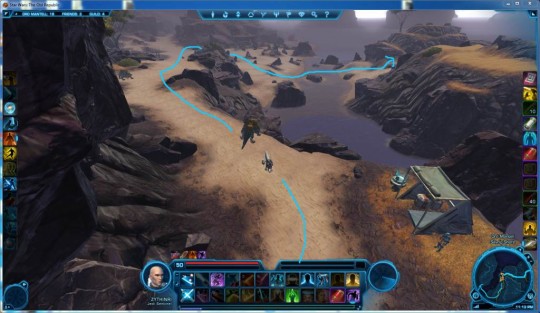 Below, we've just crossed the river. You can already see the datacron glowing up on the mountain. At this point, we're moving around to the west side of the mountain to find a way up! 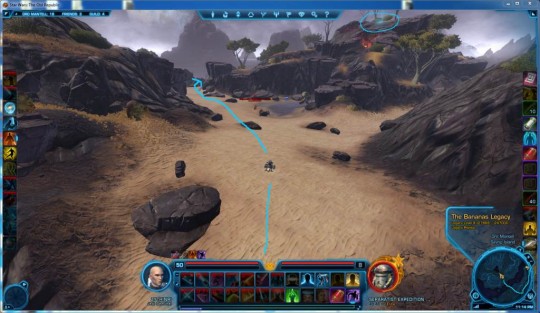 Now you should be at the south-west part of the mountain. We're about to find our entrance up! Below you can see we're about to head into the space between the crashed speeder and the rocks. 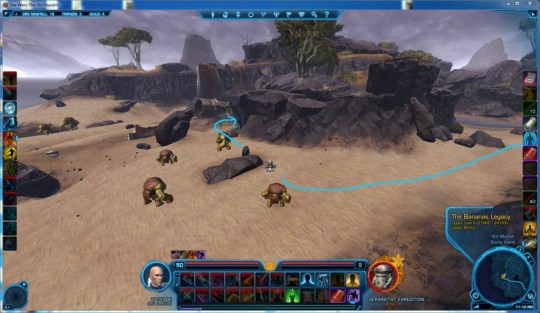 Look carefully below (you may want to click the image to see a larger view). Just passed the tree we can start jumping up the rocks. They're easy jumps, so no need to worry. 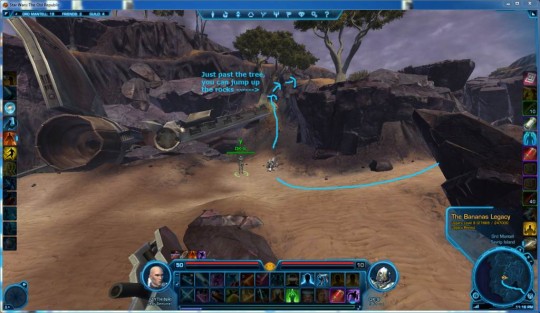 Once up the first set of rocks, you can again see the datacron glowing. Just follow the path below – there are a couple little jumps, but they aren't difficult. Just don't fall into the lava! 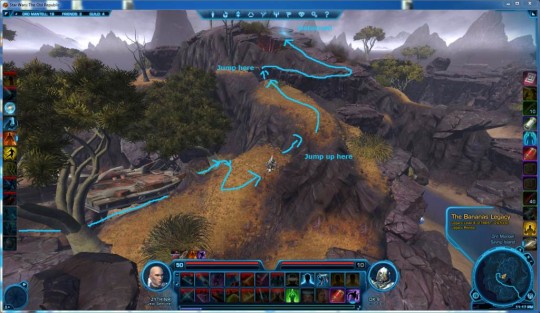 Below, we've reached the datacron. We didn't get killed by elites, and didn't fall into the lava. I'd say it's been a productive day! 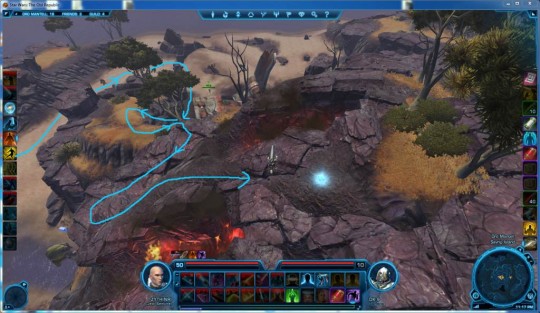 Grab your +2 Aim datacron, and you can carefully make your way down the rocks again. If you brought a friend, you can see an elite and a chest in the lower-left of the picture above – if you decide to kill him, he'll usually drop some loot!

Now that you've grabbed all the datacrons on Ord Mantell, why not head back to the Main Page and take a look at datacrons on another planet?

If you're a Smuggler/Trooper, don't forget to visit Tython, the Jedi starter planet at some point to pick up those datacrons too – it might take some extra walking, but they're just as easy.