Note: This datacron is listed as hard because it takes most people multiple attempts, and can be very frustrating. There are also mobs below who tend to aggro every time you fall. A few very precise jumps have to be made. If you find yourself becoming frustrated, take a break and try again later – coming back feeling refreshed often helps. Note that this datacron is the shortest one on Coruscant, but also the toughest one.

This datacron is located in Justicar Territory. Take a taxi there, and follow the maps below to get into position… 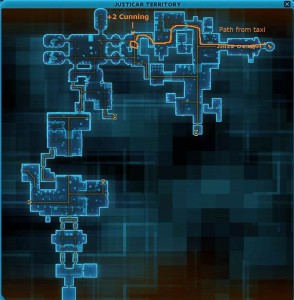 It's a short journey from the taxi, as you can see (click a map for a larger version)

You begin with a number of fairly easy jumps, as you'll see below. 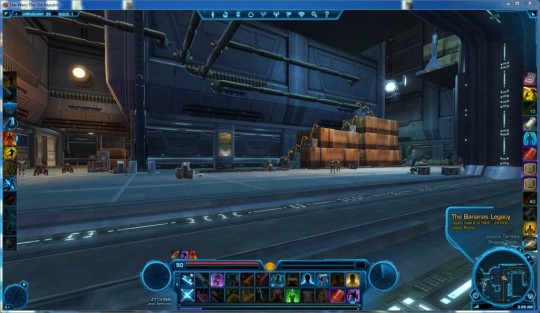 You may want to click on the image to zoom in, but you're basically jumping up a series of boxes to get to the pipes above. There are a couple points where you can fall in this box area, but most of the jumps are rather easy. 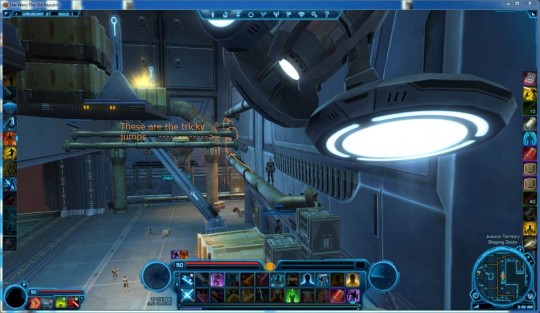 These are the really difficult jumps. You have to take a running-jump to each pipe, but because they're so small, it's hard to get enough speed to jump, and it's easy to miss or over-jump which sends you plummeting to the ground.

A few tips if you have problems: 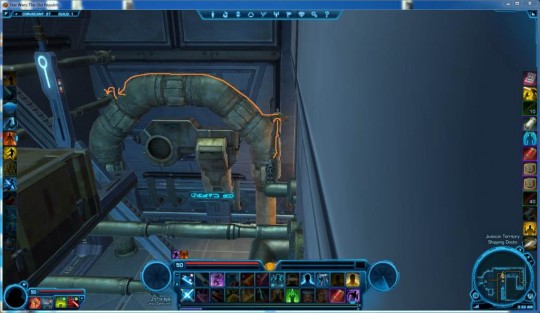 Once you're on the pipe above, you can simply walk onto the wide horse-shoe pipe (or you can jump, up to you). As you can see with the orange arrows, you're headed to another small pipe on the opposite side. 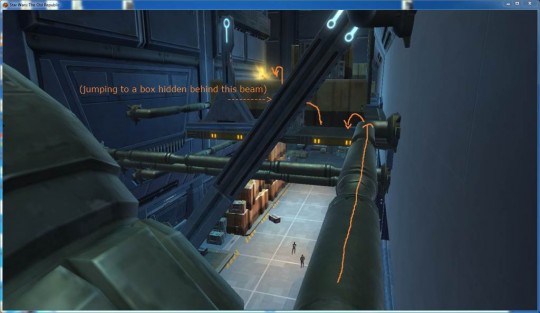 Run and jump off this pipe onto the platform. From there, it's easy going. You'll jump onto a box (mostly hidden by the beam in the picture), and then jump up beside the datacron.

This site would have have had millions of shares from Alderaan, but... you know...