Replacing thermal paste on the CPU and GPU

I replaced the stock thermal paste, documenting the process and taking pictures along the way. Way too much was applied at the factory.

Too much paste reduces the rate at which the CPU transfers heat to the heatsink. Subsequently, temperatures (both idle and load) increase. You can see the gobs that were used on my 15″ MacBook Pro here, on both the i7 2.2 Ghz CPU and the AMD 6750m GPU, as well as the heatsink: 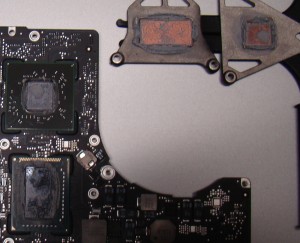 In my case, the mess of paste applied at factory contributed to temps that hit 100 degrees, causing thermal throttling (and thus, a performance loss).

Anything that reduces the temperatures of your components also carries the potential to extend the life. High temperatures aren't great for longevity.

I'd rather not be running my components at boiling point.

Why not to reapply thermal paste?

In short: You may void your warranty. It's also not terribly easy to do, it isn't considered a user-servicable item by Apple, and it's easy to break something.

If you've got high temps, rather than mucking with the internals and voiding your warranty, the “smarter” options are probably to either:

If you're like me and prefer to take the “dangerous and exciting” path, here's a brief overview of what I did…

WARNING: Just in case you missed all the void your warranty talk above, you're probably voiding your warranty by doing this. To make things even more exciting, I may have missed a step, so if you take the following as a step-by-step guide (which you probably shouldn't), you might end up ripping out a cable I forgot to tell you about. Needless to say, you're doing this at your own risk. 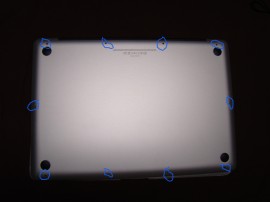 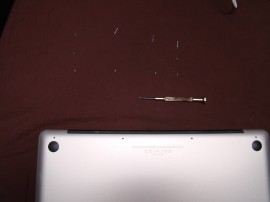 First, the bottom panel had to come off. It required a tiny phillips screwdriver and more muscle than I figured it should. One screw in particular was really tough – it may have been crossthreaded and I needed to push quite a bit to make sure I didn't strip it. 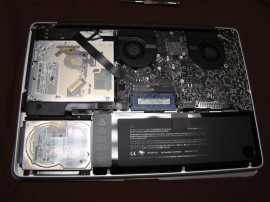 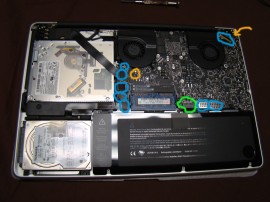 Second, I disconnected the battery. The connector pulled up fairly easily. I put a piece of masking tape in the connector socket afterwards to make sure it didn't work its way into re-connecting the power part way through. I actually tried to remove the battery completely, but I didn't have the Y-shaped screwdriver necessary, and couldn't get a good grip on the edges of the screws with a vicegrip.

Third, a bunch of cables and connectors had to be disconnected from the main board. I circled most of them above (though I may have missed a few). Some simply pulled up. Others have special clips that have to be lifted first. Others simply slide out. There's a metal plate near the bottom-right (just above the battery) that has 2 cables under it which had to be disconnected. One of the screws came pre-stripped from the factory, so I had to make do by taking off one and rotating the bracket to get at the cables. The orange arrow represents the position of a cable you can't see, which couldn't be disconnected until I had the board part way out later on. For me, disconnecting cables was the toughest part because I wasn't really sure how to remove some of the clips until I trial-and-errored it out. At one point I was about 50% sure I was going to snap a clip by the time this was done. I also forgot the ribbon cable near one of the fans at first (colored orange above, I noticed it much later). 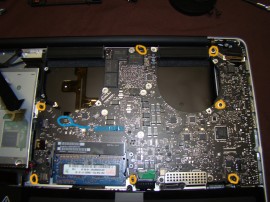 Fourth, the fans had to be removed. 3 screws each. I believe they're T6-torx. Not having that proper tool around, I managed with a 0.05 SAE allen key which was loose, but worked (barely). Each fan had a cable that goes to the board which popped up and out.

Fifth, the screws for the main logic board itself. I believe there were 3 along the bottom, another 2 in the middle, and 2 more at the top. Not positive – I'm relying on memory for the image.

I was able to start gently wiggling the whole thing out at that point. As I mentioned earlier, I'd missed the ribbon near the fan, and disconnected it here. There's also a cable in the upper-right that goes to what I believe is the power-port. The screws holding the port in were too tight for the allen key I was using, so I carefully lifted the motherboard at an angle until it was vertical, and disconnected it then.

Wow. Finally most of the way there. 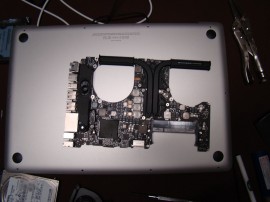 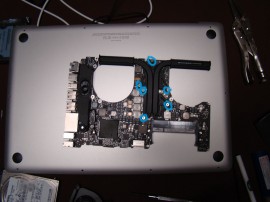 There were 6 screws holding the heatsink on the mainboard. I went around loosening each a little at a time to make sure I didn't exert uneven pressure on the chips.

It came off with a little wiggling. 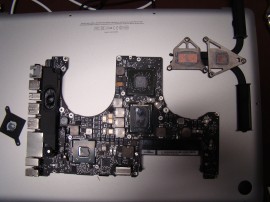 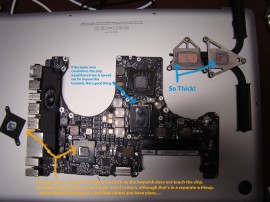 I was greeted by this mess…. Thermal paste everywhere on the chip.

It took about 15 minutes to clean up, with rubbing alcohol, a toothpick, kleenex, and coffee filters (coffee filters don't leave fibers behind, unlike kleenex which gets in tight areas well but falls apart and makes a mess). I also took the opportunity to mod the heatsink for the 3rd chip, but that's in another write-up:

If you want to see the process for modding the 3rd chip, click here

Modding the 3rd chip is a lot of work/risk for very little potential gain, so I advise anybody attempting the thermal paste swap to avoid removing that final heatsink. It's linked again at the end if you're very interested. 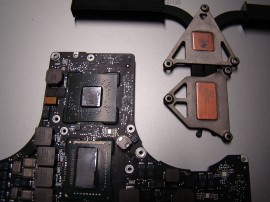 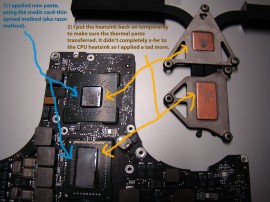 For reassembly, I applied some Noctua NT-H1 I had lying around. Artic Silver would have worked too, although sticking with a non-conductive paste is usually a good idea. The application was as thin as possible – thermal paste only needs to be thick enough to fill in the microscopic crevices between materials.

I briefly put the heatsink on by hand, simply to make sure the paste was transferring. The last thing I wanted was to find out that the CPU/GPU dies (or the heatsink's themselves) weren't perfectly level, and have 1 chip make contact while the other had a space (I've seen it with northbridge/southbridge heatsinks connected by a pipe in the past). Fortunately, the paste transferred. I put on a slight bit more, and reassmbled everything.

Getting all the cables/ribbons reconnected was the most difficult part of reassembly. I had a couple get stuck below the main circuit board, and had to lift it out again to fish the offending cable up. Beyond that, putting the MacBook Pro back together was quite simple.

So, how effective was the change? The results may surprise you, and not for the reasons you might think…

If you're interested in seeing the mod process for the 3rd chip's heatsink:

Modding the Heatsink for the 3rd chip