It's no secret that many MacBook Pros are known to get really hot under load, accompanied by really loud fan noise. I decided to do some testing. Heat is bad!

I started by seeing how high the temps could get in the stock MacBook Pro. I booted into Windows through BootCamp for this, due to the numerous utilities available for this task.

I ran OCCT to stress the CPU. The results were pretty shocking. I'll let a picture do the explaining:

Within seconds, the CPU hit 100 degrees, tripping the thermal protection (causing the CPU to severely throttle to keep itself from burning out). The MacBook's fans eventually spun up enough to eliminate the throttling, and dropped the temps to around 90. Here's the big problem….

Ok, so that's the “big” problem. Fans that spun up sooner or more quickly would keep the CPU from hitting the dangerous 100 degree mark.

Still, 90+ is still a pretty high temperature in general, which is the “other” problem.

After further investigation, there are 4 main causes/oversights that result in this situation: 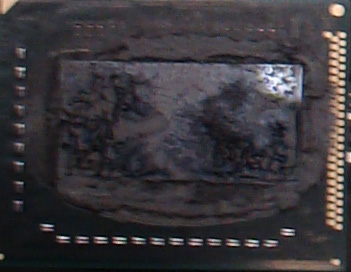 #1 – Too much thermal paste

The image above shows the paste applied to the CPU, factory from Apple. Take note as to how much oozed over the edge at the top and right of the image – the little components at the top might otherwise release a slight bit of heat through convection or a slight amount of airflow, were they not smothered in goop. Beyond that, there obviously can't be much (if any) direct contact between the CPU die and the heatsink when assembled due to the thick amount of thermal paste on the die (the bunch that didn't ooze out).

I've done my own thermal paste replacement where you can see the extraordinary amount of thermal paste on the GPU and heatsink as well. You can also find a couple examples of this in the iFixit teardown, and the MacRumors forums. Where a MBP sits in the spectrum between “too much” and “an insane amount” seems to vary from machine to machine.

Too much paste reduces the rate at which the CPU transfers heat to the heatsink. Ideally, you'd only have a tiny amount – just enough to fill in any microscopic spaces. The purpose of thermal paste is to displace the air – that's it. Any excess simply reduces efficiency. Subsequently, temperatures (both idle and load) increase.

The one area where the MacBookPro does well is in the placement of the exhaust. It shoots out the back.

Where it falls short is in the lack of an air intake. The “intake” at the back as well. A few details….

The bottom panel has an aluminum grill attached to it. The idea appears to be that the air continuously flows through this grill (exhausting through a couple sections, and then being pulled back in through other sections), transferring the heat to the bottom panel, and from there to the rest of the aluminum case. The benefit is that dust isn't likely to get sucked in from an outside source.

The first problem with that setup is that to work in an optimal manner (well.. as optimal as it can be anyway), the grill would need multiple thin fins (much like a CPU heatsink). Unfortunately, the vent grill on the MBP doesn't – there are dividers, but they're spaced pretty far apart.

The second problem with that setup is that you have a metal (heatsink) -> air (vents) -> metal (vents_material/case) -> air process that the heat must go through. It's very inefficient. It would be far better to connect the CPU/GPU heatpipes directly to the case.

The final issue is that since the design is relying on air for 1 of the steps, it would make sense that you'd try to provide cool intake air. The MBP doesn't.

Apple could potentially fix this in a firmware patch. If the fans started spinning up to high speeds at the 80 degree mark, I'd wager they'd probably spin up to the point that they start cooling things down before the CPU hit 100. Load temps would still be high, but they wouldn't hit that magical, dangerous, 100 degree level, and you wouldn't get those few moments where thermal throttling drops CPU performance while the fans spin up.

That said, whether Apple's likely to do this is debatable. The machines are pretty loud with the fans at full tilt, and lowering the temp limit before the fans kick into high gear might mean louder machines at medium-high workloads.

There are tools to manually set fan speeds (ala smcfancontrol), for those so inclined. My concern is from the paranoid-realm-of-fear that if something goes wrong the fans might stop spinning altogether, but it's probably unwarranted. There's also the distinct possibility that your fans are going to break down (wear out) before any of your other components, and that having them run at high speed more often will just accelerate this death. 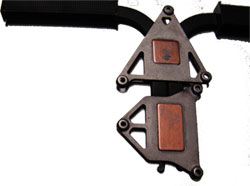 The heatsinks for the CPU/GPU are on the puny side. If you look at the image above, the copper/aluminum base is about the same size as the space taken up by the fins at the end of the heat pipes (they're a bit cut-off in the image, but there's enough there to figure out where the rest fills in). This is in stark contrast to desktop coolers where the base is generally quite puny in comparison to the finned-portion of the heatsink. To be fair, there's not a lot of room in the MacBook, so a larger heatsink would be difficult to fit inside the MBP.

I speculated on possible ways to modify/improve the existing heatsink, but came up pretty empty. The fins are thin and dense, so there's already a lot of surface area. There's not really any room to add on. Short of possibly soldering additional tiny fins to the bit of available heatpipe (which may not even bring a benefit), I can't see a feasible self-mod.

I'm sure one of the many performance heatsink manufacturers could design a better-performing heatsink in the same space, but since this isn't considered a “user-replacable” item, the odds of that happening are nil.

What's incredibly sad (and I brought this up in point #2) is that the aluminum body wasn't utilized well in the design. Even running the heatpipes along a channel in the aluminum would have surely gone a long way to helping things. This would have required a completely different design (since at the very least you'd need access to a bolt/clip that secured the heatpipe to the aluminum to eliminate vibration). Risks would be that a shock to the case might crack the CPU/GPU die, but there's an old saying… “where there's a will, there's a way”. Surely if Apple put their mind to it, they could find a way to utilize the massive amount of aluminum available in a more effective way.

Apple's been known in the past for some pretty nifty design. Whether it's sticking a pile of stuff in a small space, or finding ways to make their products thinner and lighter, each product usually looks and feels fairly cutting-edge, often being powerful yet silent at the same time.

That said, it looks like the 2011 MacBook Pro missed out on this. It's a product that really could have benefitted from some fresh innovation. Essentially, we have a product that pumps out a lot of heat. We've also got a massive chunk of aluminum available. It's a shame that somebody at Apple didn't realize this and decide to connect them directly together.

Beyond that, quality control at Apple (when it comes to their assembly facilities anyway) seems to be a bit lacking. And by a bit, I mean a lot. There's no excuse for the huge amount of thermal paste that was used, and based on a lot of other reports, this seems to be the norm as opposed to a one-off occurrence. Also interesting was that iFixit found a stripped screw and a ribbon that wasn't locked down in their teardown. I also found a stripped screw. Makes me wonder if the Apple motto for this product should be “guaranteed to come with at least 1 stripped screw“. Also makes me wonder if I've got a loose ribbon hiding away in the display somewhere too.

Fortunately, where Apple was inadequate, Intel's come through. For years now, Intel's built thermal-protection into their CPU's. I've yet to ever kill an Intel chip with heat, so I'd imagine the processor will probably survive for years, even if it hits 100˚ on a regular basis. I don't have as much faith in all the other components however – I've had many a motherboard die, and I wouldn't be surprised if the MBP's main circuit board and other components die a premature death in the stock setup.

As it stands, I see 2 real options to deal with the heat concerns:

They're mutually exclusive unfortunately. You can't take both. I'm working on the latter. So far I've got:

Replacing Thermal Paste on the CPU and GPU

My hope is that by the end of the journey I'll have load temps of under 70 degrees. Whether that's a realistic goal or not, only time will tell.