I swapped the stock 5400rpm drive for a 7200rpm drive, benchmarking before and after. Here are the results.

I won't go over the swap procedure, as it's covered in one of the booklets that come with the MacBook. For comparison, these are the drives: 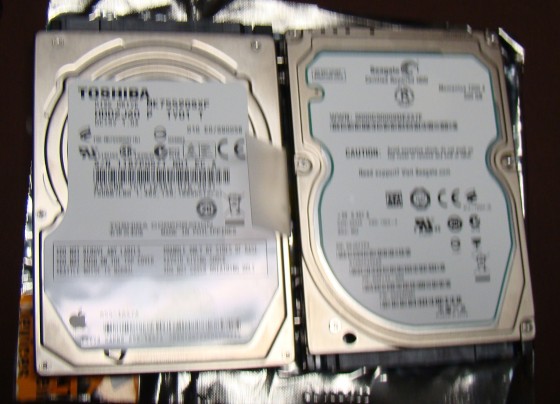 I'll apologize right now for the blurry picture. You can view a larger version by clicking on it, but trust me, you won't be doing your eyes any favors.

The new Seagate drive is smaller, but has a higher RPM (so should be faster). One interesting point to note is the power consumption listed on the drive. The faster-spinning Seagate drive actually looks to use less power (0.451A vs the Hitachi's 1.0A rating).

With the boring junk out of the way, time for the benchmarks. To keep things simple, I put the data in 2 charts – “real world” tests (timed with a stopwatch), and “synthetic benchmark” tests. 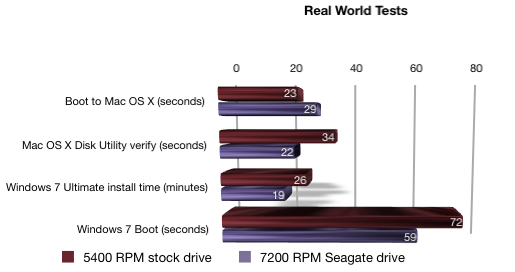 In the 1st test (booting OS X), the stock drive actually came out ahead by 6 seconds. The only explanations I can think of are that Apple optimizes the disk image installed on the Toshiba drive by default, or that selecting Rosetta/X11 during install on the 7200-rpm drive increased startup times for whatever reason. It's important to note that these numbers were taken on clean installs – literally creating the user account and rebooting.

The remainder of the numbers show the 7200rpm drive coming out ahead, shaving off up to 1/3 of the time.

Before anyone asks why I didn't run programs, I noticed (in Mac OS X anyway) that opening the default applications was near-instant, and a stopwatch isn't the best way to catch a difference in the millisecond range. The above are all reasonable real-world tasks that many will have to do at some point, and they show the difference quite well.

For the synthetic benchmark, here's the data from PCMark Vantage (run in Windows through BootCamp). It's supposed to mimic real-world scenarios, but I'm listing it as a Synthetic Test anyway: 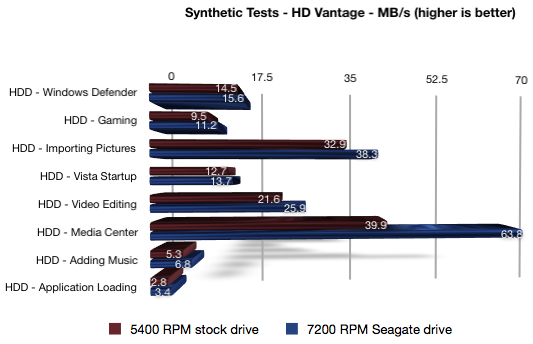 The 7200-rpm drive comes out ahead in all of the synthetic tests. Differences are generally minor, with the exception of the “Media Center” test which saw massive gains.

The difference in power ratings between the drives had me curious… would these translate to lower temperatures? Much to my surprise, the answer was yes.

These were taken at idle – platters spinning, but not actively reading/writing. Load temps (when the hard drive's thrashing away reading and writing data) would have been a bit tougher to reproduce (consistently anyway), so I didn't attempt it. Really, with the exception of a few programs and RAM-starved systems, most applications load themselves into memory, after which the hard drive sits idle anyway.

Regardless, a 4˚ drop at idle's a nice thing to see. It reinforces the notion that the faster-spinning Seagate manages to pull off lower power consumption at the same time.

A few pros and cons related to the switch to the 7200 RPM Seagate drive.

I plan to look at an SSD in the future, but in the meantime, for those considering an upgrade to a 7200rpm drive it's a bit hard to recommend. If you have an extra one laying around, by all means – you may as well take advantage of the extra performance. If you'd have to run out and purchase one, you might want to strongly consider an SSD or an SSD-Hybrid instead.