DRL Disabling in a '91 Sprint 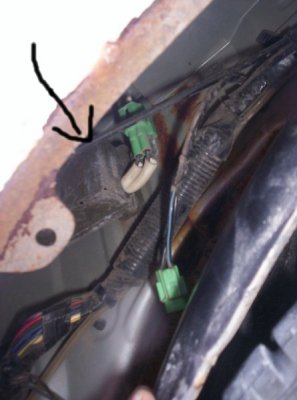 Method 1:
The first method that can be used involves unplugging the "DRL resistor" from inside the drivers-side fender, above the wheel-well. I'd actually recommend against this method (skip to method 2), because it's easy to lose some of the plastic clips that hold the wheel-well splashguard in place due to breakage.  The green DRL dash light will also still come on using this method. There is however less risk of shorting anything while performing this method.

Start by removing the clips for the wheel-well splashguard from the front first and then work your way back. You don't have to remove all the clips, just enough to give you access. You may also have to remove screws that connect the outer lip of the fender to the splashguard.

The arrow in the picture to the right is pointing to the resistor. The green plug above/right of the resistor is the socket where you unplug the wires leading to it. As you can see in the picture, I've already disconnected the green plug from it's socket, and you see it dangling below. Using this method, the DRL's will not come on (although the dash indicator will still come on). I'd suggest taping the ends of the plug just to make sure they don't make contact with anything. 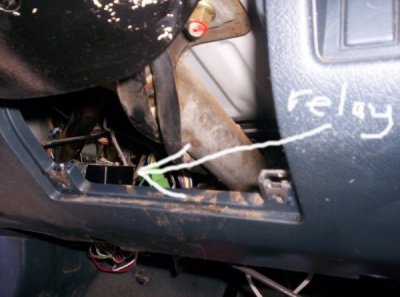 Method 2:
The second method is the one I prefer. It is much easier/better as far as I'm concerned (as long as you don't short anything). It involves removing 2 screws from below the steering column to remove a plastic panel.

Once the panel has been removed, you will see to the left of the steering column a black box mounted by 1 phillips screw. You will need a short screwdriver to remove this. If you can't find the black box even with this picture, start the car, turn off all the accessories, and lift the e-brake up/down. You should hear the relay clicking as it turns the DRL's on and off, and hopefully be able to track down it's location that way.


Once the screw is out, the box should be able to come down by grabbing it from under the dash. Unfortunately, simply unplugging the harness isn't an option, as you lights won't work at all, and the e-brake light wont come on any more (and possibly the brake light if you have a problem with the brake system). There could be even more that it controls, but you get the idea... What you have to do is remove a couple of wires. The first one is the black/blue wire. 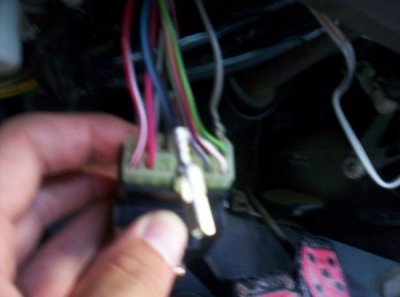 I apologize for the blurry picture, but you should be able to figure out where it is. You could cut it, but obviously if you cut the wrong wire, or ever want to reconnect it, or want to hook it up to a switch, you just added a bunch of extra work if you snip it. What I did, was I pulled the plug out of the relay box, and used one of the metal ends of my multi-meter wires to push the connector/wire out. It's kind of tricky and I'd STRONGLY suggest you d/c the battery so you don't short anything out, but basically I fiddled and pushed till the clip came undone. I had to put the multi-meter prong in pretty deep, and it took about 10 minutes before I got the hang of it, so be patient, don't break anything, and preferably use something skinny and sharp at the end.


Congratulations! Now that you have the blue/black wire out, the DRL's have been effectively disabled.  However, the green dash DRL light will still come on.  The good news is that if you want to disable it too, it just takes 1 more wire. 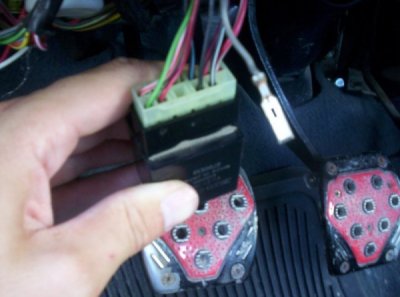 Same box, but it's the gray wire.  When you disconnect it, the green dash light for the DRL's doesn't come on anymore.  Simple!


At this point, tape up the wires so they don't contact anything.  It might be wise to then tape them to the sides of the plug they came from, in case you ever want to reconnect them and don't remember where they go.  Plug the relay back onto the harness, screw it back in under the dash, replace the cover, and things should be good to go. You will still get the 'click' from within the relay (for example when lifting the emergency brake), but the lights won't come on.


Now finally for completeness, a few advantages as well as some disadvantages to disabling your Daytime Running Lights....