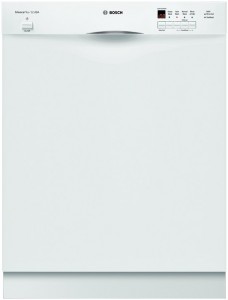 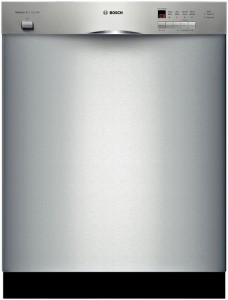 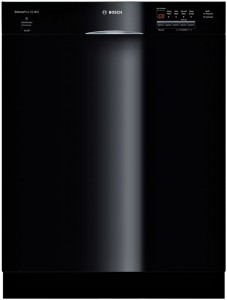 …Now for 500-series models, beginning with the low-end version: 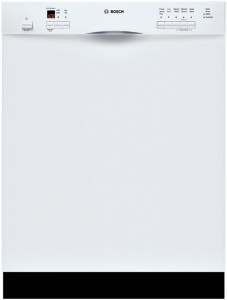 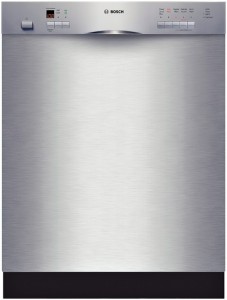 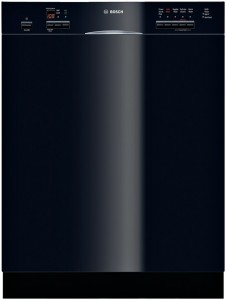 Comparison to base 300-series:

Physically, this 500-series model looks very similar to the 300-series model. The primary differences are that it's quieter (by 5dBA), has more wash options (more buttons), and contains better racks. Oh, and the unit is about 15-20lbs heavier.

ECO SETTING – We'll start with the “ECO” setting, since what-it-actually-does is the least obvious. Essentially, it lowers the water temperature, and extends the wash time to compensate. It still uses the same volume of water, it's simply running the built-in water heater less. As far as energy-saving goes, It's supposed to save about 10%.

There are a couple things (beyond the slight 10% savings) that make ECO even less exciting. First, if your home's hot-water-temperature is already very hot (say around 130-140 degrees F), ECO won't necessarily make a difference for the wash cycle because your water's hot enough that the internal heater rarely needs to come on anyway. As for the rinse cycle, it *will* make a difference (unless your home water is *insanely* hot), but the problem is that these washers use “condensation drying” which relies on the final rinse being very hot to work effectively – so while ECO may save you some energy, your dishes may not come out as dry.

OTHER WASH OPTIONS – As to the wash options, the 500-series “Power Scrub” is essentially the same as the 300-series “Heavy” wash – same temperatures, same expected run-time, etc. While it's remotely possible that there's an unadvertised-higher-pressure-system, it's far more likely that it's the same feature, simply renamed.

You do gain Delicate/Econo (80 minute), and Quick Wash (30 minute). They both use identical pre-set volumes of water – the temperatures and wash times simply differ (though those are also pre-set – they don't appear to benefit from the soil-sensor). For the water-saving die-hards, note that the “econo” wash doesn't necessarily use the least water – it's technically possible for the “Regular” wash to use less water if the sensors determine the dishes are pretty clean already and use the minimum amount. However, the Regular wash is hotter and generally runs about 40 minutes longer, so in terms of the overall energy cost, Econo will likely come out ahead in most circumstances.

The 500-series does not carry the “Rinse & Hold” setting of the 300-series dishwasher. However, you do get the “half load” feature in return.

SPRINKLER – The sprinkler can be a nice addition for those who wash tall items in the lower rack, though some may find it tedious. When you pull the top rack out, the sprinkler is popped on over the water inlet near the rear – if the water from the bottom would otherwise be blocked, the sprinkler might have a good chance at getting the upper-regions of your tall items. However, when the sprinkler isn't in use, you have to find somewhere to store it – it doesn't stay in the dishwasher.

RACKS – The 800/500-series racks add some flexibility to the system. The silverware basket is more versatile as well, able to be split & positioned in the “perfect place” more easily.

QUIET – a 5dBA sound reduction over the 300 model is nothing to sneeze at. Unsurpringly, the higher the Bosch model, the quieter it becomes.

To be frank, there's nothing obvious that makes the 500-series washer perform any better than the 300-series. It uses the same energy, the 3 primary wash cycles are identical, etc. While it has more buttons, even the button design itself is the same. You simply get convenience items – it's quieter, has an improved rack system, and contains more wash cycles/options.

Now let's look at the higher-end 500-series (though as you'll see, it's not as higher-end as you might think)… 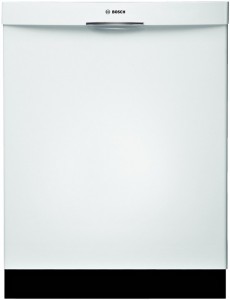 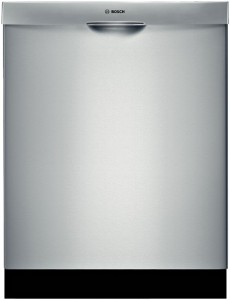 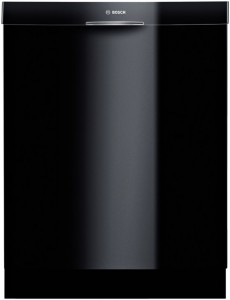 Comparison to the above 500-series:

The “hidden control” version of the 500-series actually carries a few differences from it's 500-series brother.

All-in-all, it's a downgrade from the other 500 series, though it is slightly quieter, and many would find it to be be more visually appealing.

It actually bares a closer resemblence to the base 300-series – compared to the 300, you get a better rack, forcable sanitize, a sleek look, and it's quieter (the 300 should be twice as “loud” as this 500, technically speaking), but that's where the strengths end – if those are important to you, it's a solid upgrade. If those aren't important to you, it's not much of an upgrade at all.