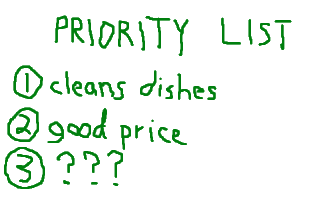 About to shop for a new washer? I've got a few tips and tricks that may help! Otherwise, check out the FAQ section in the top menu and learn more about everything from condensation drying to details about what each dishwasher cycle actually does! 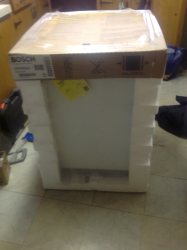 While the manual covers the installation itself, I provide a few pictures of the unit, and go over some of the issues I ran into during the install. Being prepared can save you from running into the same headaches that plagued myself. 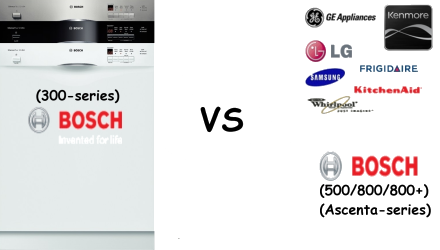 Bosch 300-series versus the rest

If you've been looking for a dishwasher, you've probably found that the moment you delve into the details (beyond “what looks the best in my kitchen?”), trying to compare models can be a daunting task.

The hope is that you find this site to be a valuable resource when researching your dishwasher purchase. The emphasis is obviously on the 300-series, but even if you're looking at another series (or a non-Bosch altogether), hopefully you'll be able to use the information here as a “benchmark” to help you compare the dishwasher you are considering.

You can scroll to the top and take a quick peak at the menus if you want to get an idea as to what information is provided here. Otherwise, to give you a taste, on this site I've:

Again, the primary focus here is on the Bosch 300-series – more specifically, the basic 2012 Bosch models. It's also known as the SHE23R series, or SHE23R5xUC series (cryptic-looking, I know). There are a total of 3 models in this series (1 white, 1 black, 1 stainless steel), which are all identical except for the color. The actual model numbers are:

Well, enough introduction. Now that you know what this site is about, why not browse around a bit, or head back to the main free-info-pages site?